06. From capitalism to the collaborative commons by Edward Berge

A relevant theme in my paper, from Chapter 6 of Lakoff and Johnson’s Philosophy in the Flesh: “As Kuhn saw, the history of science yields cases of scientific revolutions. For us, these are cases in which new metaphors replace old ones, in which the new metaphor is incommensurable with the old metaphor, and hence an entire discipline is reconceptualized.”

Hello integral friends. I hope it’s okay to share this here as I am not yet on the other platforms. I loved the essay from Edward Berge entitled From Capitalism to the Collaborative Commons. We at the World Summit movement have created an integral framework for helping us through humanity’s phase-shift that Daniel Schmachtenberger discusses. We reference his work as well as the Collaborative Commons discussed by Jeremy Rifkin in the essay. If necessary we can join the conversation elsewhere. Thanks for your review of our Integral World Summit slide show.

I replied: I looked over your power point and find that work fully resonate with mine. Count me in as a supporter. 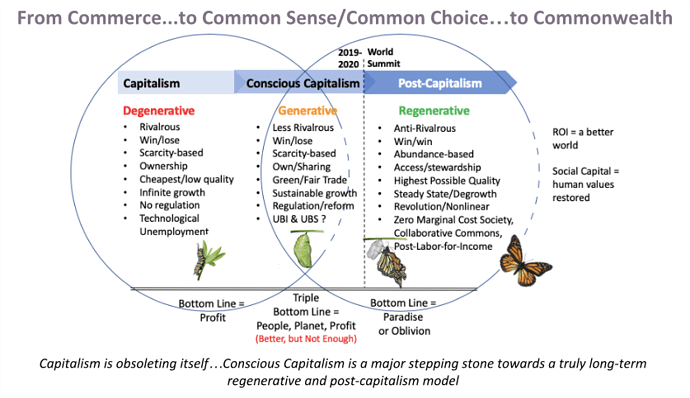 It appears for some that postmetaphysics is considered deficient rationality. Perhaps these two paragraphs in my paper might help to question that assumption?

Another thing to keep in mind is Otto Laske’s (2013) socio-historical account of developmental models. He questions the scientific or objective facts claimed by developmentalists and sees them more as a product of their unconscious societal biases. One of those biases is that very blindness in accepting the modernist (formal) premises of a pure objectivity apart from more subjective biases, as if science or math could get outside of context and determine the final truth of things. Such a blindness then doesn’t even recognize the societal shifts necessary for personal transformation, instead assuming that it’s all a personal quest and responsibility, the very values inherent to that status quo, modernist and capitalist system that only accepts personal responsibility as legitimate via this formal and metaphysical logic. All we need do is get them to personally grow and send them back into the shark-pit of the capitalist workforce, as if they then have the personal power and will to overcome it.

Another example of that is the incessant obsession with classification, and the belief that those classes are rigidly structured with clear dividing lines: You’re either in the classification or not. Laske doesn’t see this a representative of dialectical thinking but a continuation of formal logic. And this maintains the hierarchical status quo of business as usual, with the leaders in charge as they should be. However once we enlighten them with personal growth this will of course trickle down to the rest of us and make our lives better? Instead it reinforces the very formal and modernist notion of hierarchical business relationships in the first place and completely misses the actual next phase of societal development, the collaborative commons.

Thanks for the notes, @theurj ~ I have not yet read your paper, but look forward to giving it some time as I continue reviewing the new IR issue.

At the moment, I would just like make make an interlinkage between this paper and today’s CCafé topic, instigated by another Ed. I suspect these distinct discussions, as they unfurl, may shed some light on each other.

[Cosmos Café [2/5] - TANSTAAFL or There Ain't No Such Thing As A Free Lunch] @achronon introduction begins at 12:30 From the anger and rage driving much of the populous to the practical consequences of a shift to a planetary perspective, there is still a topic lurking in the background – an elephant in the room, if you will – that needs to be addressed, namely money in particular, or economics in general. The everyday question is how do we pay for it all? The world i…

With regard to your statement:

It appears for some that postmetaphysics is considered deficient rationality.

I think it just depends on who is doing the ‘postmetaphysics’ and how. I’m generally suspicious of any “post” or “meta” framing—not because it might not be technically true from an intellectual-historical perspective—but because the framing puts and keeps us in that perspectival (potentially, though not necessarily) ‘deficient rational’ (not my words) mental space, if it defines the space. How could postmetaphysics allow itself to become a thing?

On the hand other, it seems postmetaphysical thinking could be wielded (or better, weirded) to create postmetaphysical experiences. That’s what I’m enjoying about B.Alderman’s “generative (en)closures” piece, which I’m currently reading. (Yes, I am going in order.)

I suggest that to create a false dichotomy between perspective and experience might itself exemplify deficient rationality. I refer to Gidley’s tome, which I see IC has discussed. She listed some of the research that transcends the rational stage and enacts postformal stages:

Highlighting my first comment about the difference between research that identifies the postformal stages from research that enacts it, she footnotes that “this bifurcation is a rough guide and the two categories are not necessarily mutually exclusive” (104). I further suggest that such bifurcation is one of the hallmarks of the postmetaphysical critique.

She later notes that the integral-aperspectival integrates rational dichotomies (111), for example imagination and logic:

“Wilber’s term—vision-logic—is a pre-eminently dialectical term that reintegrates the vision of postformal imaginative thinking with the logic of formal thinking” (115).