CoRealizing Cosmos: A Path to Co-Realizing “Our Goodness,” with Jeffrey Quintero [9/6]

Introductions + Meditation + orientation to conversation
(from beginning to 13 minutes)

I’ve recently had a couple talks with @JeffreyQ1—who is new to the forum, but has been following the activities of Cosmos Co-op for some time, and who I’ve also been aware of, and was introduced to by @DurwinFoster.

A couple weeks ago, Durwin set up an intro session, where we determined that there is potentially a lot of overlap and alignment between what Jeff has been developing philosophically and as a founder of OurGoodness.org, and the vision for Cosmos (also see: Key Docs) we’ve been working on here. We further explored this in a follow-up call with @care_save.

For this talk, Jeff would like to present what he sees as a pathway to co-realizing Cosmos in a mutual way with his CoRealizers/OurGoodness project. This talk is an opportunity of Jeff to share his vision, and for Cosmos members to collectively explore our next steps—the first of which is simply a conversation with the community who is interested in this topic.

This is all coming together very recently, so apologies for the late notice. This conversation will be recorded and shared here for thoughts & feedback—and there will likely be more.

Insight: Implement a Minimum Viable Proposition to test as a way to start attracting co-founders for both Cosmos.coop and CoRealizers.com

So that we achieve these Milestones: 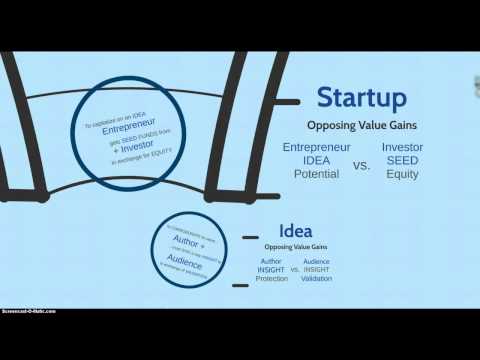 Here is my contribution in following up from last conversation: a mock-up of how user engagement might be captured & stored, and rewarded, in/on/around the Key Docs, contributing to the build-up of capacity to address said potentials in the development of Cosmos.coop, and also expand access to opportunities for intuitive/casual yet meaningful engagement for any & all Cosmos members.

Automating reward for community member engagement with Key Docs Cosmos could add auto-bounties to a specific type of user action: linking a conversation back to the key docs. (This would allow us to “crowdsource” the capacity for tying or “weaving”...

i will be interested to better understand what is meant here by “trans-cultural”, and in what way it hasn’t seemed that Cosmos Coop is already so. In terms of addressing cultural biases, I have found the Project Implicit assessments to be very helpful in informing my intercultural interactions.

@care_save you are a full-on game designer! We ought to do this for sure if we can technologically!

@JeffreyQ1: just a quick thought. In whatever way the co-realizership model evolves, I think we should consider how to publish your underlying theory of value on its own. I believe it has economic and social relevance even beyond Cosmos Co-op and Our Goodness as particular projects. I could see it providing a philosophical grounding for any number of initiatives, as well as contributing to important (broader) conversations about how we can transition from an industrial/informational civilization and to an ecological/humane one. Perhaps we could start a dedicated thread, if you would like to explore the possibility, when you’re ready?

Marco, thank so much for this thought…

I totally see and agree with your suggestions and it’s all part of the plan.

Specifically for exactly the subjective you point at “transition from an industrial/informational civilization and to an ecological/humane one.”

This in fact is what I meant today, at the beginning of the presentation ,when I said . “evolving our communal reality”

Let’s setup a time so I can show you what I have and we could decide what to bring into a CoRealization… let me know when is good for you?

BTW I also have creative urgency to go get funding for this work. I believe we are very close and suggest we push forward… How do you feel about that?

I want to say I believe this was a significant dialogue today, as evidenced by some personal turbulence I felt afterwards, integrating it all – and all of which includes the wisdom of @care_save. as Integral community liason, I can say that arguably the biggest stumbling block in that community has been that the sex/gender piece hasn’t been fully integrated, as evidenced in the various scandals.

Thank you @JeffreyQ1 for this stellar presentation. And, for this being the first presentation to a group, I applaud your bravery and effort. Many of my questions were answered, and questions/comments I have remaining will be answered with future presentations. I too had difficulty with understanding the roles, seats and how this would appear in the regions via cloud…but that will be better understood as future discussions arise. I am looking forward to seeing how your vision meshes with what has arisen within Cosmos.

Added timestamps under video recording above for quick reference points.

Let’s setup a time so I can show you what I have and we could decide what to bring into a CoRealization… let me know when is good for you?

I’m a little fuzzy on my schedule for next week, but should be clearer later today, so I will get back to you soon.

BTW I also have creative urgency to go get funding for this work. I believe we are very close and suggest we push forward… How do you feel about that?

I feel good about it! But let’s not rush it. I feel the urgency, too, but it’s also important to have the conversations and think things through. But not overthink things, of course.

I believe we are no longer operating on Standard Industrial Time. The future is coming to meet us. We just need to be reasonably prepared to seize the day.

Thank you so much @Douggins for this very encouraging comments. This is also my first public presentation of the CoRealizer Model and P2P Network Architecture.

As the co-realization process continues… from your questions I learn what needs to be better explained.

So, I will produce a Prezi of how the CoRealizers.Cloud WebSite will work.

being rather propertarian ;), i would ask have you/we claimed the relevant domain spaces on the internet? And since I raised the issue of political economics, I wanted to share this visual that I believe helps guide us towards healthy expressions, in the manner of “Social goodness peacemaking” rather than social justice warpathing. It’s from Bryan O’Doherty, whose work on integral politics I really appreciate. 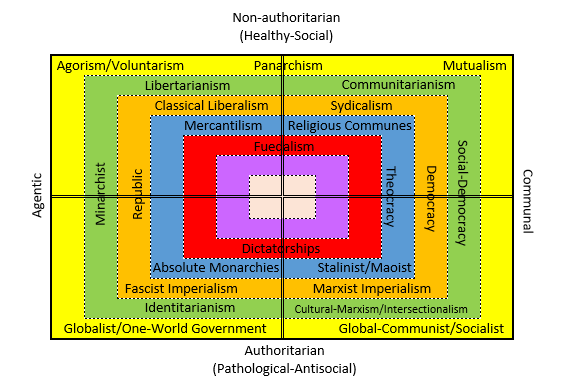 .
To me this visual helps us orient towards healthy “green” on the way to healthy “integral” political expression, where health is defined as non-authoritarian.

2 posts were merged into an existing topic: Creative Urgency to develop our MVP and secure Funding for Cosmic CoRealizations

I had mentioned the Bloom network during this talk, since they are working “on the ground,” as it were, to create local communities. Bloom was previously known as the “Evolver” network (started by Daniel Pinchbeck, et al) and the local nodes were called “spores.” That effort disintegrated for various reasons which I know only gossip-level information about—but Bloom picked up the pieces and has been re-growing the endeavor for something like 8 years now.

I am not currently connected to any Bloom communities, but I know that Caroline has talked with Magenta Ceiba, one of the co-realizers of Bloom. I share this here because there is probably a natural affinity w/ Cosmos & CoRealizers, although we could learn from our differences too.

Bloom Network: inspiring a billion acts of regeneration, by gathering online and in-person to collaboratively envision and enact a brighter future.

I knew this was coming up and was invited by Magenta to participate in organizing/speaking months ago, but I simply had no bandwidth this time around. I’ve gotta offer her a mea culpa and try to get more involved in next year’s. If things progress with Cosmos, next year is going to be a grander conversation than ever.

It looks like the big event is next April:
http://www.bloomnetwork.org/pollination-2019.html

I would go. Maybe we (as Cosmos) could participate in some way…