Discussing the first part of the reading~

yes. not sure it’s possible to read (and absorb) 70 pages per week.
I noticed that in the intro hang-out, the most critical of points in the text were not even addressed. (I am not sure whether people simply missed them, or whether the “get to know you” aspect superseded the conversation about the text, but…)
it seems hard to move on without establishing a basic foundation for understanding and discussing Gebser’s work.
(I am a big big Gebser fan. LOVE him, as I am sure others here do too~)
Gebser makes it very clear that the integral isn’t exactly about getting “beyond” time.
For Gebser, time is a “quality and an intensity” rather than “a system of measurable relationships,” so it isn’t getting away from the concept of time as much as it is shifting the conceptual relationship with time.
He further states that “either time is fulfilled in us”(we self-destruct) or “we succeed in fulfilling time” (we learn to creatively mutate and create a new future). we have no other choice really. if we don’t outlive the crisis of humanity, the crisis will outlive us. and, who KNOWs what is meant to happen? not me.

In addition, it is important to remember that this shift is already happening. It was already happening when he wrote the book. It was already happening before he was born.
(We are just becoming aware of it, some of us faster than others.)
He states that the conception of his work here occurred in 1932 (80+ years ago!) and the mathematical shifts that he referred to were happening in the late 1880’s, maybe earlier.
so. the Integral state of consciousness is already present and manifesting.
Part of the problem for humanity is that because it is still taking shape (and WILL BE FOR OUR LIFETIME AND BEYOND) we must learn to live in the not-knowing and uncertainty.
THIS is the hardest part.
In addition, moving into an integral consciousness does not mean leaving all other (modes? as someone suggested) behind? It means using the gifts (efficient phase qualities) of those modes as we move further into the future. As technology increases, we need to increasingly rely on previous ways of knowing in their efficient aspects. This requires us to understand what the efficient/deficient aspects of each phase entail, and what are the signs of their manifestation so we can move out of “deficient modes” of functioning.
anyway. hope to meet up next week at the hang-out~ best~

I just saw this here, and I’m glad you opened a new thread for discussing the firsts part of the reading. I had responded where I found it in the Wilber/Thompson thread, but I’m going to paste in that answer here so that we’re all on the same page, so to speak. (I haven’t figured out how, or if you even can, link threads to each other. But, that’s for the tech geeks to figure out, at the moment, I’ve got bigger fish to fry.) So, here’s what I wrote there:

My experience has been (and I’m guessing it’s going to be similar in this online reading just as it was in my face-to-face reading group in the mid-90s) that we’re all going to go to the hangouts with the best of intentions, but we’ll never know where we’re going to end up. Gebser’s is too intense a presentation to hold it still. (I like to say you never really read Gebser, you always start reading him.) The get-to-know-one-another will be necessary as long as new faces pop up at the sittings, and I enjoyed hearing (I wasn’t there personally) what others’ intitial reactions to Gebser was, aside from the fact that some had dealt with EPO extensively and others hadn’t cracked the binding yet.

The atemporal or achronic to which you refer, and this is the reason for my response, are, as I think I understand them, describe our total, not just conceptual, realtionship to time. What I mean by that is that it is “more” than conceptual, it is also vitally experiential, undergone-experiential, conceptual, and veritional (and it’s quite obvious we don’t yet have all the words we need to describe it).

A language-based side note: in German, there are two notions for “experience”: there is erleben/Erlebnis and there is erfahren/Erfahrung. As we only have one English word, Barstad/Mikunas went with “vital experience” and “undergone experience” which well capture the flavor of what we find in the German. Erleben, is a derivitive of the verb leben, “to live”, hence the vital aspect. Erfahren is a derivitive of the verb fahren, “to drive, ride”, hence the difference is character to erleben.

In the hangout, Jeremy read a passage from Gebser that deals with what you are highlighting, I believe (on p. 285, second full paragraph), which describes quite vividly all the facets of time that we must deal with in an integral way. He says, just prior to this (first full paragraph, p. 284),

The concept of time is only an inceptual motif for the awakening consciousness of the aperspectival world. [...] What is prepared for is more than mere concept of "time"; it is the achronon, or time freedom, a freedom and liberation from every temporal form.

It would seem we have our work cut out for us, and, as you aptly point out, not-knowing and uncertainty play an important role, but it wouldn't be an adventure without them now, would it?
3 Likes
madrush (Marco V Morelli) January 16, 2016, 7:18pm #3

I’m going to reply with a link to a dedicated topic for collecting thoughts, impressions, and resources relating to Chapter 1. I will create similar topics for other chapters as we move through them. From these, we can variegate (using the same “reply as linked topic” function) as needed.

I’ll give it a try, anyway. It may not be the best option in the long term, but perhaps it will give some focus and organization to the discussion and ensure we’re covering as much as possible.

Here is how to reply with a linked topic: 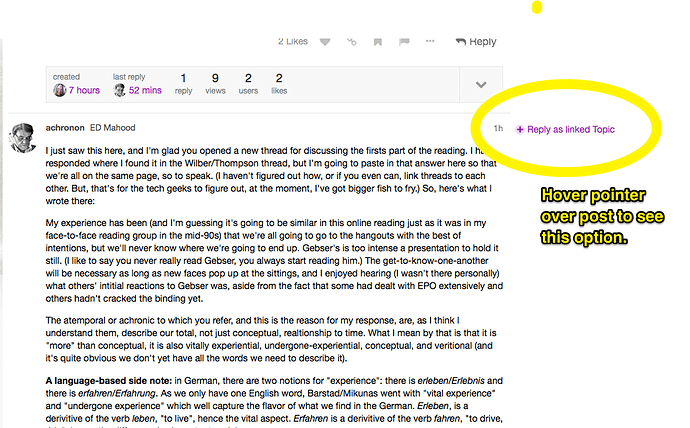 This is helpful especially for going “off topic” without derailing the current thread.

Speaking of our reading schedule, I will also bring this up in a dedicated topic. Indeed, one of our first meta-inquiries here might be how to relate to our reading process both from a space of time freedom as well as “on schedule” or in time.

thank you. a learning curve for certain~ X

thank you for your always insightful and linguistically related response. This is one of the major aspects of my own work. the noun/verb conceptual basis implicit in language structures that has largely been bifurcated in the Western understanding of language. Studying German (Karl Abel’s work) or French, or Sanskrit, Hebrew, Farsi… any of these reveals this aspect of language so clearly. I appreciate what this (you) brings to the conversation here so much!

Excellent. Thanks. Maybe before we’re done reading, I’ll be able to use the site more effectively. Great help.

“I like to say you never really read Gebser, you always start reading him.)”
An entrance point into infinity is always the beginning, no matter how far in you go.

nice Marco! it will be great to think about it through that lens.