As a core offering, Cosmos provides platform-enabled/enhanced templates for processes that are tried & true (and ever evolving/iterating per our best knowledge at the time). Also known as “best practices.”

Key & major templates include the Five Pillars: Sponsorship and Incubation; Production; Publishing and Distribution; Marketing and Promotion; Marketplace; and Conversations and Community. These may all effectively be viewed as processes*–tied to outputs–which Cosmos explicitly hopes to foster on behalf of its creative members. The desired outputs are, respectively:

Note how, in the order presented above, each facet naturally flows over into the next. But it doesn’t end with marketing: rather, marketing tends to bring new people into the conversations and community, which amplifies the cycle all over again. 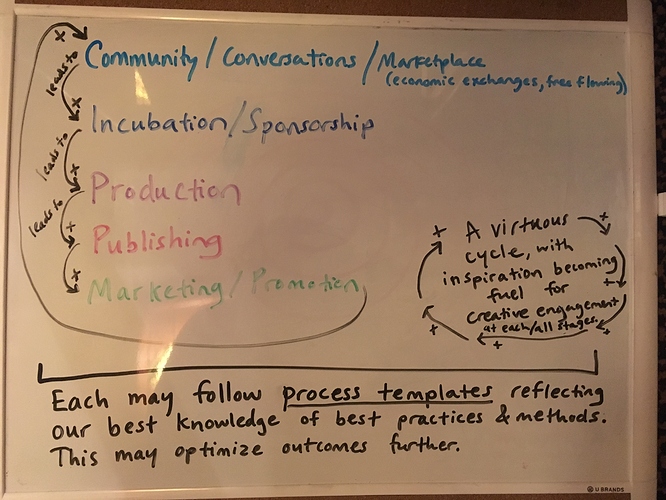 *Note that all of the above titles describe actions , with a bit of agnosticism to the outcomes—benefits are not guaranteed, but they are likely to arise through appropriate actions and sequences of action.

In addition to process templates, packaged into the Playbook and containing the best practices/methods for realizing the results implied in each of the above, Cosmos will provide supportive architecture (platform [technological], community [social], and cooperative [economic/governance]) for people to participatively seek their individual, group and collective actualization. This supportive architecture is captured in Cosmos’ Constitution. Such supportive structures/utilities that are constitutional to Cosmos include: platform infrastructure and workflows for: Litcoin and Cointribute (C>), gamified resource-raising (via open co-budgeting methods/competitive proposals), project spaces, conversation spaces, marketplace functionality, marketing/promotional mechanisms, dashboard & other platform affordances, co-op & algorithm governance, etc.

The templates are made available in interactive forms. In order, from lowest to highest fidelity/intensity:

Informational. At the early stages, Cosmos may provide only informational process templates (through the community collaborative intelligence-gleaning project of the Playbook) for Production and Marketing especially, as those processes can be complex, and the appropriate technological interventions to support those functions may be wide-ranging or ambiguous. Despite the complexity of any given process, it would be ideal for the community to work on distilling its best knowledge about each into informational resources. One great feature of presenting purely informational resources that reflect best practices & processes is that users can innovate, tweak, and customize them however they sense as appropriate to suit their purposes. At the informational level, the processes can be implemented autonomously, or may be followed by groups. Providing informational “process templates” may seem too obvious or of little value, but doing so is not of insubstantial value: oftentimes approaching creative processes can seem obscure and complex, thus discouraging people who are attempting to undertake them in isolation. Whereas if the best processes are known and shared (and iteratively improved upon), and if the community/social spaces model their utility, members are inclined to benefit.

Social. Imagine dedicated social spaces where members, constituting communities of practice , were actively practicing various steps in the processes related to the five pillars. Such as, an incubational space dedicated to comedy podcasts, to metamodernist prose, or to spiritual poetry. And a production zone dedicated to podcasting, or book writing, in which participants can cooperatively engage their peers (even hire them) as editors, reviewers, and coaches. This social dimension refers to patterns of interaction happening in the social/community domain that reflect the processes of each pillar and result in the intended outcomes. Again, this is highly customizable.

Perhaps I just need and want one other skilled individual to walk with me through the entire marketing process. Perhaps I can pay that person LitCoin, or perhaps I have a valuable skill that my companion could benefit from, and so we work out a trade. Perhaps I want to work in isolation until the point in the process in which editors get involved. Perhaps I want to work in the context of an intimate community of no more than seven people who are at the same stage as me in these processes. Perhaps I prefer a wild, discursive, expansive and large environment for the generation and incubation of new ideas. Whatever my style, I can find—or I can establish—that pattern at the social level, through simply leveraging the platform spaces to reflect the process templates.

It may make sense for the temporary formation of groups performing different functions at different points in the process. (E.g. See production process*: there are five distinct roles noted in the process, thus suggesting at least one person, additional to the creative, should be involved for best results.) These temporary cohorts, coming and going with demand from users, could form into nodes on the platform where participants may specialize in certain services. Thus a cohort of people providing production services might form a collective and begin offering services together. They may even progress into developing sophisticated proposals for “plug-in” features and functions, enabling improved performance of those roles.

Thus the segue from informal patterns of mutualized human action into platform “plug-ins” or even Cosmos-official functionality, though a progression to a more sophisticated “embodiment” of the community’s learning, is yet a smooth one. Especially true if any functional action any person takes on the platform (e.g. agreeing to play the Editor role for a compatriot’s writing project), is visible to others (via badges & rankings). So whether someone has experience or social credibility (and their rating/ranking) in a given function or role can be easily seen and searched by community members. Then those folks can be grouped and solicited to give feedback on how the platform could better serve their purposes in the context of those roles.

Technological. This is the most resource intensive, and thus likely the “last” step in establishing concrete processes in support of the desired outcomes. This refers to Cosmos/the community “sponsoring” the build-out of platform technological capacities, features, etc. that result in new productive capacities.At maturity, we envision Cosmos hosting a cornucopia of plug-ins that users can “add on” like packages to their member utilities, opting into or out of them at will (see: Plug-ins Strategy). These would become technological “frames” for the processes described above, enabling efficient and user-friendly engagement in streamlined processes (e.g. a podcasting production platform [with community built-in], or a book publishing platform.)

In terms of the user interface, envision the steps in a process template configured as frames or screens to be progressed through in order, thus like a micro-progression game, conveying the player and her media product through any of the processes. At each room or step in the process wherein outside resources could be drawn upon (either, necessarily, or optionally to enhance or accelerate the outcomes), the system might recommend the inclusion of immediately-accessible plug-ins that support that need—I.e., a variety of skilled individuals and/or technological “apps” would be “at the ready” to enhance and enrich the process for the user.