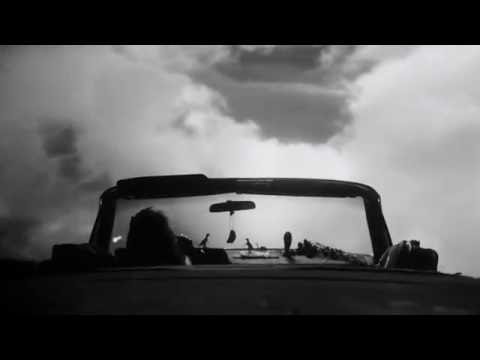 Question: The darkness and desolation of Gonjasufi’s new video for the track Vinaigrette is undeniable. It’s eerie and colorless– an isolated figure wondering the lonely Southern California streets plus the feeling of emptiness in the cold environment of a run-down motel room. It makes me think of St. John of the Cross and his writing about “the dark night of the soul.”

Richardson-Borne: Funny, I didn’t find the video dark– quite the opposite. I saw the freedom of the open streets in the early morning and the romance of the street lamps curled with the eerie silence of the city’s expanse. What you call “an isolated figure” makes a left turn into a horizon of pillowy clouds and endures some kind of ecstasy while being alone in a motel room. The film feels alive, present.

The “isolation” you mention reminded me of the seeker’s journey as the path to awakening is learning to be utterly alone. Utterly. Non-separation is a condition where all of humanity exists inside of who you truly are. There is no first to make a second– which means one is always alone but never lonely, never isolated. You know the world as yourself, non-separate and unidentified.

I also heard Gonjasufi sing about “losing innocence,”– something that caught my attention. Awakening to non-separation is losing innocence but gaining Innocence. One loses the innocence of being blinded by separation, but gains the Innocence of knowing that nothing arising in your awareness is your doing.

R-B: Everything you fall in love with is a silhouette, a reflection of reality. It’s not real. If one is still identified with the body and mind, there is a solidity to existence that is believed in that is not really there. After awakening, this solidity fades into a bigger dream where the fiction of silhouettes is seen through. And as the world of silhouettes continues on just as before, the knowing you have is different, not separate.

Spiritual teacher, Adi Da, called these kinds of experiences “garbage.” Straight up, garbage. But yet we continue to sift through this garbage in hopes that we will find a state of mind or feeling called awakening.

Q: Is that dark night of the soul?

R-B: It can be. Dark night of the soul, as I understand it, usually begins when one gets a brief glimpse of non-separation via a state experience while meditating, doing drugs, having sex, playing sports, wandering in nature, or even while feeling one with the movement of a city. But since these glimpses are not the “real thing,” it leaves a person hungry to re-experience the peace and connectedness of that state (even though state experiences have nothing to do with enlightenment.)

Since the initial taste of non-separation is an impermanent state experience that didn’t stick, one begins to do anything possible to get back to that place, to make sense of it, to apply it in some way. This is when the match of the seeker’s fire is lit and can lead one to an experience of darkness where “normal life” just doesn’t feel the same anymore. One’s meaning system has changed– your old life just isn’t what it once was.

Q: My seeker’s journey started after a major bout with depression. Is the dark night of the soul and depression the same thing?

R-B: Generally no– though they may be connected in some instances. Depression is a physical illness more akin to cancer than to “seeker’s frustration” or a “spiritual crisis”– though this frustration can lead to a situational depression.

Gonjasufi has battled his fair share of demons– but as a self described bodhisattva whose only purpose in life is waking people up to their true self, you notice in the video, moving through what you saw as the darkness still lead to the sun-rise– the beautiful light of a fresh morning. This light, non-separation, is what lives under the dark night of the soul, even if one can’t always see it.

Q: I feel like I have plenty of experience with the darkness. What does the light feel like?

R-B: As do most people. But even what they consider happiness is just another form of darkness as this happiness is connected to a body that doesn’t exist. Happiness is another delusion, a distraction keeping one from taking a real look at their condition– another form of impermanence that creates the need for a merry-go-round of experiences that must be chased to keep one’s self alive in a “happy” existence. People may call it happiness, but it’s just words that agree with a story they’ve learned is supposed to be called happiness.

Happiness doesn’t feel “good,” which is just the opposite of bad. True happiness is non-separation, which includes recognizing the nature of the full range of human emotions.

Seeing enlightenment described as blissful can be misleading (though I guess it’s possible for realization to lead to a permanent elation). But for us mortals, bliss is more generally used to describe the peacefulness that comes with recognizing the “rising sun” of pure consciousness.[/details]