Notes on Wallace Stevens and Animism

Wallace Stevens’ “A Postcard from the Volcano” is a beautiful poem about matter and memory. It brings the philosophy of Henri Bergson to mind. It is a poem about the memory of objects, or more precisely about how a memory is not information contained in the mind; rather, it must be imagined as expansive, material, atmospheric. Memory is something that contains us, not something we contain. It is not information. The past is the setting of the present and future.

The narrator in the poem reflects on the mansion he lives in and in which he will die:

We knew for long the mansion's look And what we said of it became A part of what it is ...

In the future, the mansion as an entity will include all that the narrator has said and thought about it. Which is to say: the experiences through which an object manifests are constitutive of the object itself as an autonomous entity. Objects are constituted in experience (human experience is just one variety). But they do not exist “within” our experience, “within” us as subjects; rather, each experience of an object expands it, allows it to express its being objectively.

All of the elements that make up the mansion exist on their own, experienced or not. Stevens is not an idealist. But the elements only constellate as a mansion — a homely mansion for the narrator, a haunted one for the children of the future — through encounters with human beings which are themselves similarly constituted.

In other words, all things substantiate themselves in encounters, in meetings, as Martin Buber wrote. It is through human experience that a mansion learns to be a mansion, that it learns to be homely or haunted as the case may be.

A new house feels cold and dead because, as an object, it hasn’t yet learned to be a house. It is a house in form only, that is to say, it is a design, an intellectual ideal, the concept of a house given material consistency. When we say that a house feels lived-in, we are saying something about the house itself, not just about our impression of the house. The house has come to life as a house, it knows itself as a house. It has a genius loci, a spirit of place that is indistinguishable from it.

Later, having been abandoned and then occupied anew, the mansion in the poem will hold as part of its being all of the memories formed in conjunction with it. My guess is that nine times out of ten, this is what we mean when we speak of ghosts. “Children,” Stevens writes, “[will] speak our speech and never know,”

Will say of the mansion that it seems As if he that lived there left behind A spirit storming in blank walls ...

The mansion confronts us with all of its past, which is real and in a sense, ever-present. Stanley Kubrick's film The Shining reveals this with a force equal to Stevens' poem. 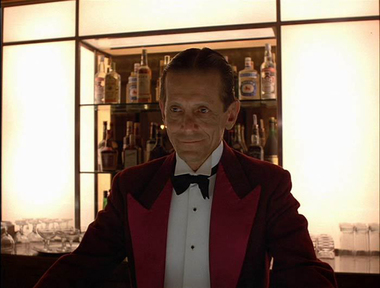 “Orders from the House, Mr. Torrence.”

There is no interiority whatsoever. Belief in interiority, in private unextended subjectivity, is a modern conceit. It is a human attempt to reclaim the centre that humanity has lost. In fact every private feeling, every “mental impression,” is an objective material event. Matter is spiritual. Matter is a thinking substance through and through. Everything is alive. “All things shining.”

ADDENDUM – Some readers have expressed confusion at my statement that Stevens’ poem suggests the absence of interiority.

I don’t mean that thought, feeling and imagination do not exist. What I mean in these notes is that our “interior world,” what appears to we modern people as a private realm that is closed off from the world of objects, is not actually closed. Our thoughts are already out there in the world, objects among objects or forces among forces.

The idea is that mind is an aspect of the universe, not the exclusive property of private subjects (Descartes). The universe includes psyche; it doesn’t oppose it, nor does it exist in a separate order from psyche. In the poem, the narrator’s thoughts about the house do not belong only to him: they belong also to the house, which preserves those thoughts as part of its own being. And they belong to the children of the future who will inhabit the house. After all, if those children “will speak our speech and never know,” it follows that the narrator himself speaks the speech of other beings without knowing it. “There is no interiority” means that there is no disentangling subject from object.

JF, this Bergsonian view opens new worlds here. Matter, and the fluidity between places, people, times. What is this fluidity for? What does it mean? Can we access it more profoundly?
…………………………
Stevens knew the Bible very well—almost as well as Shakespeare knew it.

The poem stands on its own. But it also stands in relationship to the Bible.
There are foxes and grapes, perhaps the same foxes that traipsed through the Song of Songs and ate the same Song’s grapes that grew in that faraway, yet connected, place….
The “bones.” This is the 32nd poem of the collection “Ideas of Order,” which is now also within the larger opus, “The Collected Poems,” which is a collection of collections. Like Shakespeare and a few other poets, Stevens is doing in this collection a running hidden commentary on the Psalms. Each of his poems has literary connections with the Psalm of the same number.
Psalm 32 has “bones,” as does this poem, the 32nd. There are more connections too between this poem and Psalm 32.
And there is the mansion. The Farewell Discourse of John’s Gospel: In my Father’s house are many mansions. Back to Bergson—the promise of matter. We will know the matter of our bodies far better, and all the cosmos, and the Divine.
In that discourse (Chapters 13-17) there is talk of the Holy Spirit, who will teach us “everything.” The connections of all things, all time, and places.
Here, in this poem. Surfing with the Spirit through All. In the Hebrew Scriptures, Ruach means “Spirit, breath, wind.” In the Greek New Testament, Pneuma, remarkably, means the same: Spirit, breath, wind.

Cognates of these same words appear in the poem: spirit, breathing, and windy.

The Spirit, and our spirits, are connecting us. Connecting everything.

Yet the mansion is shuttered. These realities have been hidden for centuries and millennia, and Stevens is not allowed to say them openly. Nor was “Will” (line 18) Shakespeare.

These connections–finding them and utilizing them–are our course in Synchronicity, a language of the Spirit.
Jung said that Synchronicity is everywhere, when we learn to see it.

The Spirit is “storming in blank walls.”
This is A Postcard from the Volcano.
There are vibrant things in these blank pages of verse.
There are mansions in words of love in our hearts, “smeared with the gold of the opulent sun.”

Thanks for this. The connections you make are illuminating. Are you saying that Stevens intended them or that they are synchronistic? The end of your comment seems to suggest the latter. I certainly agree that there is synchronicity everywhere; works of art in particular are open to a multitude of interpretations because the same symbols recur in the culture over and over again. The piece I just wrote on Stranger Things touches on this.

Thank you, JF, for this helpful distinction.
Are Stevens’ echoes of the Psalms intended or accidental? It seems that they are intended. As with Shakespeare’s aligning of his 154 Sonnets with the 150 Psalms, which is also intentional, Stevens is intentionally aligning his poems with Psalms of the same number. (It helps to take up a pen in one hand, and “The Collected Poems” in another, and to number them, because Stevens doesn’t number them himself, although he is very aware of their order and implicit ordinal numeration. Each new collection in the book begins new parallel relations with the first Psalms of the Psalter.) In the future I hope to have a full essay on this, but in the next days I’ll try to make just a few examples of what he’s doing. Wallace S. and William S. are doing literary-poetic feats of a parallel greatness to those of Simone Biles.

Let’s make another distinction: Synchronicity, as I have navigated with it, is almost entirely subjective (I’m using that word in a different sense than your essay does). It leads one (each of us guiding our internal microcosm) in the process of “integration” with the external macrocosm. Jung speaks of this. This is very much how the Holy Spirit, or the Divine, operates in our life, I believe. Synchronicity gets our attention, and may actually give us marching orders.
This is different than repetition.
Again, repetition is different than coincidence. Deja-vu is more of an internal event combined with an external event. This is like Synchronicity, and can be an instance of it. Repetition can be a part of Synchronicity, but does not have to be.

Back to the Psalms and poets: By tracing what these Scripture-loving wordsmiths have made for us, we can enter more deeply into the world of the Psalms and the Spirit’s languages of Synchronicity.

I look forward to your piece on Stranger Things. In those shows there is a language of just 2 characters: 1 and 2. 1 means yes and 2 means no. This may be a language of the Holy Spirit in our own lives–it has been for some people. The fact that it appeared in the show may be Synchronicity.