Revealing the Culture of the Current: an Interview with Conner Habib

Editor’s Note: As I’ve recently stated elsewhere, Conner is a man of many hats: philosopher, esotericist, writer, gay porn star. He has spoken widely about subjects like sex worker advocacy, gender and culture, occultism, and the evolution of consciousness. We talked about his upcoming workshop, “The Culture of the Current,” (starting next Sunday, July 31st), and discussed how art, imagination and emergent thinking can help us tackle the challenges confronting us in this complex historical moment.
Jeremy: I’m very drawn to what you’re implying in the description for your workshop. It speaks to our deepest anxieties and hopes right now, doesn’t it? Corrupt powers are consolidating into global behemoths of themselves just as new, revolutionary, political forces and conversations are taking hold. Amazing technology surrounds us, but we’re filled with that creeping anxiety, the dread of living at the edge of a cliff—in our case, the Anthropocene, climate change, etc. The glass is half-full and half-empty, collapsing into a singularity. A new world seems entirely plausible and yet it often feels like we’re about to implode before we get there.

It’s hard to keep this all in your head at once. Especially in your mentioning that some of the very structures of our reality, things we take for granted in modern society, like representative governments and even “religious impulses” are “relics” crumbling in the face of an entirely new way of doing things. So, I might start out by asking you the most preliminary of questions. It’s the big question we’re exploring here at Metapsychosis. How do we even begin to think about all this? What does that kind of thought even look like?

Conner: A kind of downward spiral can happen when you approach the state of the world: The disastrous US election! Mass shootings! Police Brutality! Taken alone, they’re bad enough, but they can build and build until you feel utterly overwhelmed and helpless. So as for how to begin, there are two ways: One is kicking and screaming, which is the tendency (and the one that many people and institutions in power feed on), the other is with some clarity. So that’s how we begin, or how not to begin. We don’t begin with fear, and we understand that whatever is happening is necessary for and even, perhaps, asked of us in this moment. That’s the foundation. If you can’t dispel the fear entirely (and who can?), you notice it, and let your thoughts run parallel to it rather than letting it intrude so much.

Then, one by one, you examine the phenomena. Not just with data — although of course data can be useful — but with an eye for patterns. These might be patterns in the phenomena themselves; for instance, that activist movements such as identity politics movements and Occupy both have profoundly important messages of resistance. It’s clear through them what is being resisted. But alternative positive politics are not articulated in them (that doesn’t make either of these movements lesser movements, by the way; it’s just an observation of what they are). Or there may be patterns in yourself; the expression and limits of your feeling and empathy during crisis events, for example. Why should I feel deeply moved when certain events happen, but not others? Where is that framework coming from? The individual is everyone’s starting place, so it’s ridiculous to look at world events without inquiring into the self, and vice versa.

Which thinkers have contributed to your thought? You’ve got a few listed on your event page, like the biologist Lynn Margulis, and the anthropologist Bruno Latour. I’m interested to know how they helped to develop your ideas.

Lynn was my mentor and like a second mother to me, and I owe some of what I’ve already said to her. She studied two things, really: bacteria and earth systems. And she studied how they intersect. In other words, her view was both microscopic and planetary. Lean forward, stand back. As above, so below. So her perspective and approach was as helpful to me as the content of her work (which was also mind-blowing).

The anthropologist Bruno Latour and some of his colleagues have brought me a long way to understanding how important experience is. Since anthropologists have to take experience seriously, they are, in some ways, the foundation of all other sciences, because all science springs from human sense and experience. Of course, it’s not just my own experience that I need to take seriously, but the reported experiences of others. You can’t just dismiss someone else’s sufferings, desires, beliefs, etc as stupid or “un-evolved.” Anthropology had a tough time with that in the beginning, but has caught up with itself in many ways. But it’s even more than that. Anthropology insists we question our own beliefs and experiences and prejudices, not just of political concepts or whatever, but of reality itself. You have to (here’s a fun academic buzzword, but I think it’s really useful) decolonize your mind; Latour’s particular emphasis is in decolonizing our minds from the phony objectivity claims of scientism. You have to undo yourself to come close to anyone else. What would that mean in encountering not just the indigenous person, as anthropologists are typically thought of doing, but the religious fundamentalist? The Trump supporter? What might you learn if you engaged with them seriously? Anthropology is the science of compassion and real engagement.

I’m glad you picked out these two thinkers to ask me about, since, if I’m going to try to figure out what’s going on in the world, Lynn’s macro/micro perspective — and more importantly the tension between the two — as well as real listening and inner decolonizing, are key.

How does spirituality, or mysticism underpin all of this for you?

Spirituality underpins everything I do. The culture of materialism and consumerism is a specific kind of spirituality, after all, and it’s played a huge part (though it’s not wholly to blame) in getting us where we are now. To keep moving and changing, we’ll have to readdress our spiritualities, even if it’s the spirituality of not having a spirituality.

Does art, or imagination, play a role in this new way of thinking?

Yes, especially fiction and poetry. Poetry is obvious to me: Poetry is a refusal of the world, particularly the names of the world and everything in it, as it is. Poetry demands things be said on new terms, on the terms of the poet first, and then the reader. A poet does not have to accept that a table is a table, they exercise understanding of that object as a relation to their own individuality, and write accordingly. Poets have been saying this for a long time, though not enough people have listened.

Fiction is important, though I wasn’t always so sure why. Once Daniel Pinchbeck asked me what role I thought novels had in the upcoming world (this was before 2012, of course), because he couldn’t see any. He thought – back then, at least – that they were a distraction. I love fiction, but it took years and years for the answer to arise. Now I see clearly that it cultivates compassion and vision. When I read, I have to co-create the world using the symbols in front of me, and in fiction, those symbols are of a non-existent world.

Co-creating the world with the symbols laid out in front of us: What could be a better description of what is needed right now? We need to see what’s before us, learn to read it, internalize it, and then create it by combining it with our individuality. Fiction that pushes on the boundaries of the real is what is most instructive, since what is “real” and “possible” is basically owned by people in power. So we need to start our training in the impossible. As soon as, um, possible.

Was Rudolf Steiner saying something about the Culture of the Current in his own way?

Rudolf Steiner, as your readers probably know, was a late 19th—early 20th Century philosopher, scientist, mystic, etc. He created biodynamic farming, Waldorf schools, and more, directly out of his spiritual-scientific worldview. He wasn’t a prophet, but he had plenty of warnings for us about our time, which was his future. His idea was that the world was going to be slowly permeated by the influences of something called Ahriman. Steiner thought of Ahriman as a literal being, and I think that’s a good way to consider him. But to describe in totally secular terms: Ahriman names the vast realm of materialistic impulses. The dependence on technology, the dampening of feelings, the belief that love is just chemicals in the brain, the idea that we’re biological robots. I mean, he pretty much nailed it long before these ideas were popularized. Not a bad warning. The thing he also said about the age of Ahriman is something I take to heart and that is present in my course: there’s no way to stop Ahriman from coming. There’s no way to stop these impulses from growing and growing. They will do so on their own, with or without our consent. What matters instead is how we meet these impulses. How do we move with them, and eventually redeem them? 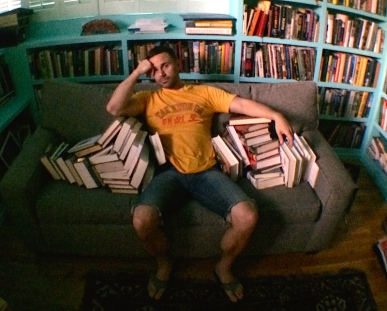 Readers, do check out Conner Habib’s upcoming online workshop, “The Culture of the Current,” (starting this Sunday, July 31st) where you’ll be able to unpack a lot of what was shared in this interview through in-depth conversation and collaborative study.