The Burning Ghats of Varanasi, India – by Ania Chapska 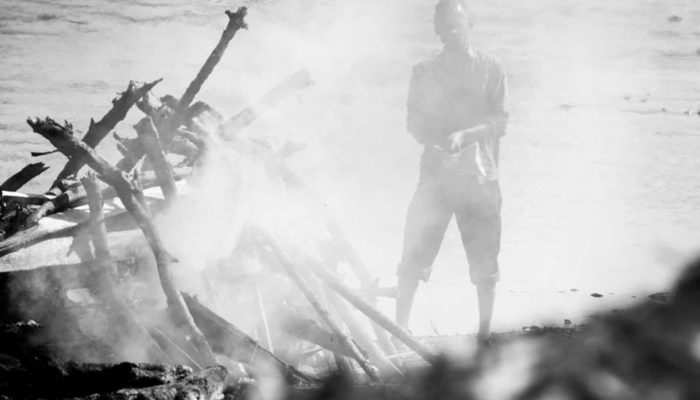 I’m sitting downwind from the raging fires that are viciously swallowing up whatever still remains of the material manifestation of a once breathing, living body. The skin on the face peels back to reveal features which do not distinguish one from the other, but rather reveal our human sameness. Fingers curl and shrink into tiny bones, into ash, into nothingness. The skin shivers as it burns, shape shifts into a gum-like substance, then char, then dust, releasing from it an odor that my nose and throat repel. I am thrown into fits of coughing and desperately try to spit up whatever is slowly attaching itself to my bronchial tree, whatever is fighting with the tiny cilia soldiers which are loyally protecting my body from further invasion. But it’s too late, for death has already entered and is winning the gruesome battle. Death carried by wind, penetrating my hollow cavities and making its presence bitterly known. I can taste it on my tongue’s back palate; the spicy, pungent, acrid flavor of charred fingernails, and sizzling flesh, perhaps even some Indian spices consumed during the last supper. I want to run back to my room and wash my body, scrub my insides, even if the water for washing comes from the very river that holds the ashes from these hungry fires, along with the bodies of those who were above and beyond burning—the holy ones, the pregnant ones, the lepers, the snakebite victims, and, of course, the children. I want to escape and never come back, never look back, but I know I chose to come here, was summoned here, and I must respect the choice and the calling.

A very evocative piece with some powerful lines…

Those who have died are suddenly alive, louder than India herself, silencing the whole world around, until nothing is left but a quiet passage.

But, really, the whole piece is just so vibrantly worded, I had to re-read it a few times to really get more out of it.

I hope we get more stories from Ania in the near-future. It’s a bit like traveling there yourself…

No greater exhortation to live than to witness that alchemy of transition by fire.

I agree with @Jeremy - it transported me, encouraged to see beauty and grace amidst the gruesome-ness of charred flesh and hungry dogs.

Great things in little packages. A fully-sens8 experience of the churning of bodies at the cusp of worlds. As I fall through the air, dust and smoke of these words, it feels like my senses are wandering over scenes like the scent from a rotting corpse.

An evocative account that brings back memories of a night at the Manikarnika Ghat, watching glassy eyed while the haunting chant Ram nam satya hai, satya bolo mukti hai launched the dead on their journey, leaving the living in the midst of the mystery until their turn would come.

Francis! Good to see you here. Hope you’re well. Thanks for sharing with us a glimpse of your own experiences.

Hi Jeremy:
Great site, I have passed it on to others and wish you all the best in getting this up and running.