Transparency is the Only Shield against Disaster (Parts 1–2)

So, what does it mean for the Apocalypse to take place in the present moment, and, somewhat paradoxically, to be always just about to occur?

Transparency is the Only Shield against Disaster (Parts 3–5)

That our world has already ended, of this we may be certain. But is it the end of “a world” or of “the world”? It is reassuring that the prophets of world destruction have proven almost 100% wrong—…

Transparency is the Only Shield against Disaster (Parts 6–7)

Has the Shadow become more user-friendly? No. Whether now or 2,000 or 10,000 years ago, the shared identity of the Shadow and the Guide has always presented itself in the form of an ultimatum, whic…

Brian, thank you for this piece. There were several points and words that jumped out at me.

Most notably your reference to the fish image, and certainly the line “Like an inhabitable fish, a visceral longing for the Apocalypse was once more rising from the depths.”

What exactly does the fish stand for over time in myth and literature?

For the past 40 years of my life, I’ve been doodling them. Ever since I was a teenager. I still have most of these doodles. Then recently, in January 2020, I stood at the flip chart and quickly doodled the following Fish, then added some color.

Flies very fast through the air

Horizontal to the ground

Passing through the window into a house

As it passes through the window, over the sill, the fish very quickly turns its head to bite and feed at something (not seen), all in one seamless movement while continuing towards a person sitting in a chair facing this oncoming fish attack.

And just before the fish makes contact with this person’s face it’s destroyed by some squarish anti-fish missile coming at it from the side.

The scene repeats itself once more identically, then I wake up wondering what the fuck.

I know of ancient Christianity’s fish symbolism, but I’m not sure of any other meanings (other than feeling it’s an archetype of something).

So, I would appreciate any insight on what the fish represents in myth, literature and archetype. Throw in some dream interpretation if you like.

Below are some images of my Fish doodle processing from January 2020: 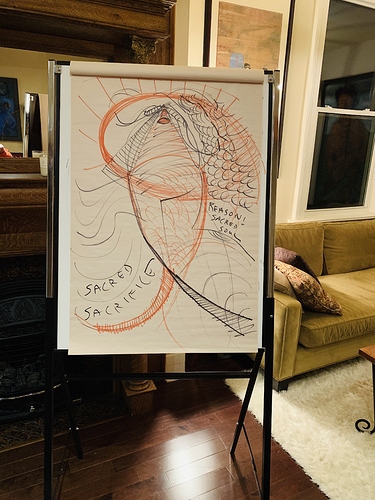 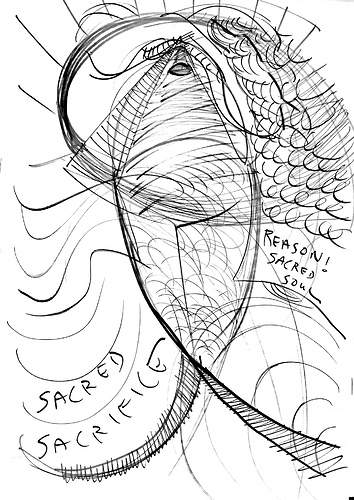 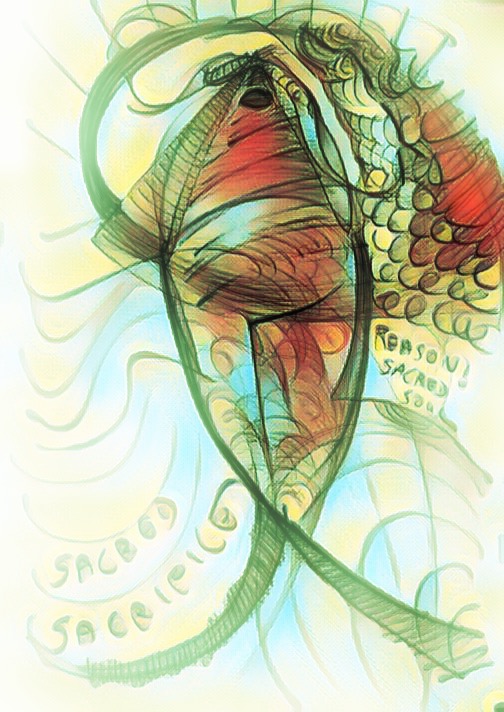 I really enjoyed seeing your fish drawings. They are quite intriguing. In the upper part of the drawings, there seems to be some sort of a spiral or an opening. Is the fish causing this spiral form? Is it swimming through an opening?

Fish definitely have great mythological and cosmological resonance. In a wide variety of cultures, fish are associated with primordial teachers, ancestors, half-gods, the bringers of arts and sciences from a lost civilization or higher dimension. Quite often, there are eight of these teachers (or seven, plus one). It is often not entirely clear if these beings are physical humans wearing some sort of a fish headdress and cape or interdimensional beings who manifest in a fish form or primordial beings of some type that are associated with the element of water.

Here is a description of the Dogon “Nommo”:

"The Nommo or Nummo are primordial ancestral spirits in the Dogon religion and cosmogony (sometimes referred to as demi deities) venerated by the Dogon people of Mali. The word Nommos is derived from a Dogon word meaning “to make one drink.” The Nommos are usually described as amphibious, hermaphroditic, fish-like creatures. Folk art depictions of the Nommos show creatures with humanoid upper torsos, legs/feet, and a fish-like lower torso and tail. The Nommos are also referred to as “Masters of the Water”, “the Monitors”, and “the Teachers”. Nommo can be a proper name of an individual, or can refer to the group of spirits as a whole. For purposes of this article “Nommo” refers to a specific individual and “Nommos” is used to reference the group of beings.”
__

The body of the fish–in terms of its shape–also has enormous significance. The “Vesica Piscis”—the shape created by two overlapping circles—is one of the first key figures in sacred geometry. In Kabbala and many other traditions, the cosmos is visualized as a sphere. This sphere has an upper and a lower half, with the earth as a horizontal plane of theatrical action. This one sphere turns against itself in order to become active, to project itself into time and manifestation. The fish created by these overlapping spheres can then be further elaborated, with each anatomical detail corresponding to some cosmological aspect or power or level. While the image of the cosmos as a sphere may not correspond to much scientific theory, it can definitely be experienced on a visionary level. I had a number of experiences in this direction in my late teens, and I was quite surprised to later find the correspondences.

Here is a brief excerpt from my prose-poem “Nostalgia for the Future of Geometry on Io,” in which the Babylonian figure of Oannes puts in an appearance:

“Nostalgia for the future of geometry on Io— tilt . A small error in transcription could shift the time of their departure. The records could be far too open-ended about where a particular line-break should occur, about which of several interpretations of a symbol should be used. So too, there was no guarantee that a planet would behave. The ruins—off by 22 degrees. The acupuncture manikins became what they saw. They could not found Earth’s navel without help. Oannes took his fish suit out of storage. If you want a thing done right you have to go yourself . He too forgot. On Earth the vatic force did not show the concealed. The local self could not create by word of mouth.”

And here a drawing from a series that I did between 1989 and 1992. This is a mummified fish rising up from a pot: 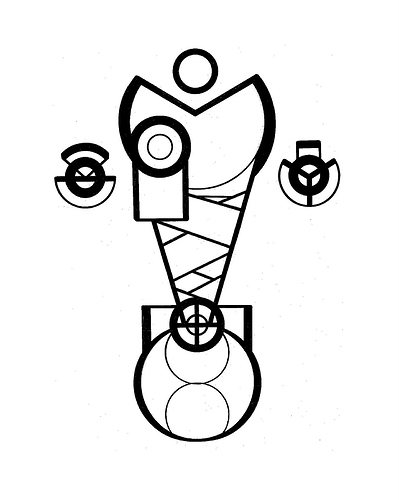 And here are some images of fish gods or teachers from various traditions: 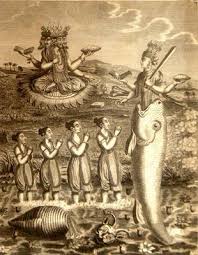 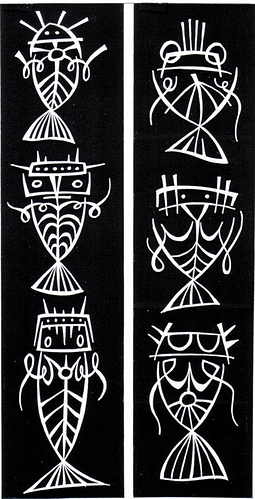 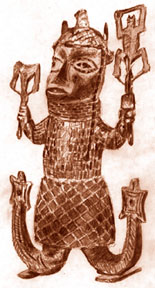 Brian I thank you for your reply and will read carefully to digest more. In the meantime, this came to me today. About the Apocalypse.

"Apocalypse does not point to a fiery Armageddon but to the fact that our ignorance and our complacency are coming to an end.

"Our divided, schizophrenic worldview, with no mythology adequate to coordinate our conscious and unconscious — that is what is coming to an end.

"The exclusivism of there being only one way in which we can be saved, the idea that there is a single religious group that is in sole possession of the truth — that is the world as we know it that must pass away.

“What is the kingdom? It lies in our realization of the ubiquity of the divine presence in our neighbors, in our enemies, in all of us.”

Your discussion reminds me of the artist, Kate Bush, who created a record company called “Fish People.” Check out her comments regarding the naming of the company here: Fish People | Kate Bush Encyclopedia