Consciousness in the Aesthetic Imagination – by J.F. Martel 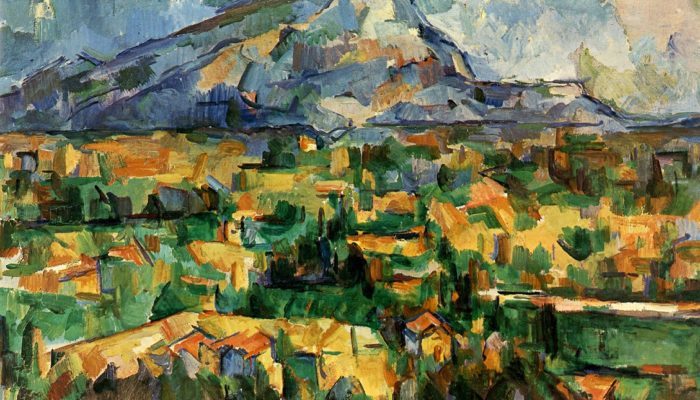 This paper also has a companion podcast episode! This discussion topic is dedicated to both the essay and the podcast.

The Rifts of Art: Reclaiming Our Capacity to Be Affected by the Real

J.F. Martel is a writer and filmmaker living in Ottawa, Canada. He is the author of Reclaiming Art in the Age of Artifice, published by North Atlantic Books. This episode is a companion to J.F.’s e…

I like how J.F. Martel starts his essay by comparing the sunflower in its chopped up presentation format unique to the past 500 years or so, and in a more unmediated experienced format via the painting. What a great approach!

It reminded me of some lines from Emily Dickinson:

I dared not meet the daffodils,
For fear their yellow gown
Would pierce me with a fashion
So foreign to my own.

I have this feeling often. It’s disconcerting, foreign, alien. Perhaps the feeling that’s most powerful is longing. In the summer time, it increases and I call these moments summer time blues. I think it increases in the summer because I am out in nature more (especially in fields) and I get this powerfully impressive sensory experience - of a horizon with the insects, and birds, and vegetation, a sun setting, and then a stillness settles in until the next day.

It is as J.F. writes - Nature intruding into my pre-culture unmediated human experience.

“The first man must have seen auguries everywhere. He must have trembled at each step that he took.”—Giorgio de Chirico

Many thanks for another of your wonderful essays. Your dense and challenging but rigorously clear style of writing always makes me slow down as I read, turning each statement over and over, until, by the end of the essay, I find that I am reading at a fraction of my normal speed. This is similar to what happens when one is focusing on the in and out movement of the breath during meditation. Your way of moving in and out of the multifaceted presence of a painting helps me to understand why certain paintings move me much more than others, why certain paintings command my attention and continue to fascinate while others, even though I may pause to take note of their virtues, fade almost immediately after my viewing them. Your way of analyzing by expanding rather than reducing pushes me to see how a great painting achieves its mysterious effects, without making those effects any less mysterious.

In studying the paintings of Hammershoi and Vermeer that you discuss, I could not help trying to relate these perfectly organized domestic interiors to your concept of the “rift.” Most often, you speak of such rifts in the context of a piece of writing, where the rift is a sudden disjunctive opening that yanks the reader from the known to the unknown, from the intended meaning to something that perhaps takes even the author by surprise. As I imagine it, such a rift is the aesthetic equivalent of a wormhole, a twisting of the fabric of time/space, of habit and harmonic chaos, towards ends that can never be fitted comfortably into any three-dimensional schema. Given the quiet familiarity of their subject matter, the two paintings in question would not appear to yawn open in this way. If anything, one might almost say that they were hermetically sealed.

The presence of mirrors in both paintings is, I think, significant. To attempt to come to terms with their complex of meanings is like trying to grasp one’s reflection on the backside of a mirror. Such a reflection both is and is not the person looking at it. Both the person and the reflection are always something more. One can test this by staring at one’s reflection for some extended period of time: the image will become steadily more foreign and unsettling. Most often, we are too busy. A great painting—much like your writing—forces us to slow down, as if it were the first day of creation, as if we had never seen the world before. Yet in the same way that a mirror turns any desire for entrance back upon itself, Vermeer’s “Woman with a Balance” and the Hammershoi interior do not, at first glance, seem to provide us with anything that we might think of as a rift. The relationship between viewer and painting, an asymmetrical one, calls to mind that of the seeker to the Beloved in a Sufi poem: in calling to us, the Beloved makes us aware of the fact of our separation. So too, in these paintings, it is exactly the surface tension that produces the experience of a rift: there is a disproportion between the simplicity of such scenes and the complexity of our response, between the detachment of the artist’s technique and the intensity of our perception, between our ability to categorize the objects at which we look and the mysteriousness of the effect that they produce. These scenes should not so greatly haunt us. As we stare at these paintings, they stare back at us, daring us to step through.

In looking at the light falling at a certain angle through a window, at a vase set just so on a bureau, at a woman’s fingers pinched with a certain degree of muscular tension on a balance or at a hand resting lightly on a table, we are experiencing not only the immediate contents of our vision; no, we are experiencing a great many things at once. Paradoxically, to see and feel and touch and intuit these many things is to simultaneously experience the massive “there-ness” of the object, the person, the gesture, and the scene. If there are, in fact, ten or eleven dimensions, as some physicists argue, it is no doubt a mistake to think of these as being spatially distant. However strange they may be, they may also be as close to us as air is to the surface of our lungs, and we may move through them at every moment—somehow managing to avoid disaster!— without knowing where we go. These widely separated worlds may be as simply but mysteriously entwined as is our image and its reflection in a mirror. As we stare at these paintings by Hammershoi and Vermeer, we might find that we have stepped suddenly from the mirror’s front side to its back.

Hello. We just published @madrush’s companion podcast episode with @jjf.martel titled “The Rifts of Art: Reclaiming Our Capacity to Be Affected by the Real.”

This discussion topic is dedicated to both the essay and the talk.

The Rifts of Art: Reclaiming Our Capacity to Be Affected by the Real

J.F. Martel is a writer and filmmaker living in Ottawa, Canada. He is the author of Reclaiming Art in the Age of Artifice, published by North Atlantic Books. This episode is a companion to J.F.’s e…

Hi Brad-- Thanks for your comment. You describe that feeling of presence, alterity and encounter in nature beautifully. That passage from Emily Dickinson is particularly germane here. Few poets have had a keener sense of the strangeness of nature than she had.

Brian, thank you for your kind words, and for deepening the analysis. I’ve been reading Martin Buber’s classic book “I and Thou,” and I’m astounded by the parallels and resonances here. You write: “These widely separated worlds may be as simply but mysteriously entwined as is our image and its reflection.” It’s a beautiful observation that is central to Buber’s mystical writings.

I often think of the image of g-d hovering over the “face” of the waters or the deep. The image haunts me. When reduced to this most basic schema, which is also the schema of everyday life, you have a presence, a surface, and a hidden depth. Even the omnipotent cannot see everything at once!

In Egyptian tradition, the Eye of Horus is lost for aeons in the abyss. Shu and Tefnut—perhaps “breath” and “fire”—drag it back to the higher worlds. But why would the Eye be so careless as to get lost in the abyss? In Gnostic tradition, human prototypes, when they were first descending to the Earth, were lured by and became obsessed with their reflections in the water. What else were they supposed to do but take a look? In Genesis, when g-d says, “Let there be light!” he does not create the world, as such. How could he, when all of the contents both of this world and of past ones are concealed beneath the ocean? In Kabbalah, this earlier state of creation—to some extent at least—corresponds to the black light of Ayn Soph, the nothing that contains the potential knowledge of the all.

What has become more and more apparent to me through the years is that this hovering primordial presence, however powerful he/she/it might be, does not actually know yet what is hidden at the bottom of the ocean; he/she/it cannot directly reach out to touch what might be there, any more than we can touch our image on the other side of the mirror. And yet, there is clearly a connection, however much this connection is not quite what it seems. The separation of the light from the darkness, of the Earth from the waters, does not in any way create something out of nothing; no, for the something was already present in the nothing. This light simply allows for a certain type of investigation.