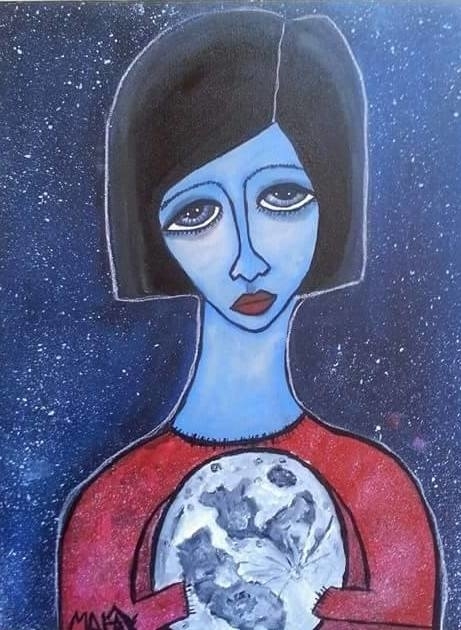 Every day, when I sit alone in my dark room. Staring at nothing except the brightness of the moon I imagine I can hold it and put it as a lamp in my room. I can do whatever I need to do, like reading ,writing and painting. (I don't need such a few humiliated hours of electricity.)

The eyes are amazing.

The eyes evoke several responses from the viewer, and convey several understandings. (For people who love art: a good way to survey the artist’s use of light in a work is to squint your eyes, and this highlights lighter and darker areas of a work.)

[details=Read more]The moon that the young lady holds is the largest source of light. However, the woman’s eyes have the largest continual areas of purest light, in the whites of the eyes. And the pupils of the eyes each have two dots of light, echoing the stars of the heavens.

This brings us to matters of microcosm and macrocosm.

The artist, Malak Mattar, writes that she looks up at the night sky during electricity blackouts at night in Gaza. She wants the moon to be in her room, she says.

Earth desires heaven. The heavens are within the sphere of the human heart, soul, and eye.

Each star is an eye of Allah-God that sees her.

There are more connections between diversity and unity.

The young lady embraces the moon. This is also the womb, pregnant. The moon’s waxing and waning is connected to women’s cycles, both occurring in 28 days.

Malak Mattar has ingeniously emphasized a mother’s breasts here as well. Indeed, the red of the young lady’s shirt is here a tender color.

Additionally, the woman’s chest and arms are stable.

The moon is safe, entirely secure in the warmth of the mother’s embrace.

Or, the mother is the Earth, and the moon is close by, in close orbit around her, attracted and held by the loving gravity of the mother.

However, the stunning centerpiece is not the moon, but rather, the young lady’s face. This face is an enormous diamond suspended in the heavens.

Above, we mentioned that the woman’s chest and arms are very solid and centered. However, the artist makes the neck, head, facial features, hair, and upper posture a very complex system of balances and interrelations. Nothing is balanced and centered, on its own, above the red shirt.

Related to this is something that is more important than we might expect: the part-line of the hair. This part is a thread, a string, that holds the face, the face that is also a mask. This mask is a tragic mask.

But a tragic mask waits to be balanced by a comic-joyful mask.

Clearly, there is sorrow….

However, one of the two sensational eyes, the left eye, even in this sadness, is well-balanced, and by itself steadies and balances the potentially unbalancing right side of the face, the mask.

That this face is also a mask is also revealed by the fact that it participates in the largest contrast in the painting. The face and the moon are the 2 greatest sources of light here. (The viewer may want to squint their eyes again.) The hair closest to the face is the darkest part of the painting. This contrast lifts the face towards the viewer, either as a mask, or as a face of Gaza that desires contact with the world.

One wants to make first the little girl smile, then Gaza smile, then, then, then the earth and moon and cosmos will smile. The sadness shall be transformed to gladness.

The warmth, tenderness, and shocking stunning beauty of the work conquer the sadness.

To return to the maternal themes—the tiny little fingers also speak of tenderness and sensitivity.

The cycles of the moon speak of life eternal. The children of Gaza are like the stars of heaven.