Here’s something I wasn’t expecting…but I was feeling restless this morning, and while meditating got the idea to experiment with writing a poem that would openly break with objective grammar and even semantic meaning. I was inspired by our recent Cosmos Café on Jean Gebser’s 1941 essay, “The Grammatical Mirror,” which argues that subtle changes in language are evidence of a mutation in consciousness which he calls the “integral.”

During the call, I noted that since the time of Gebser, our ‘grammatical mirror’ has pretty much exploded (while remaining mostly mentally fixated) but that we might ‘update’ Gebser by finding evidence of the post-postmodern (integral) now. This text (and accompanying audio) is meant to illustrate that point. This might also be an extreme example of the ‘cryptopoetic’ style described here https://www.infiniteconversations.com/t/on-reasonable-risks-and-revelations-or-the-valentine-in-my-shoe/1742. It’s also fairly influenced by recent readings in Sloterdijk (i.e., “spheropoetics”).

Toroidal trigonomorphosis of the centripetal illusion of Being through the n‑sphere of the centrifugal In-Between in-formation outlining a Vanishing-Line in the virtual lineaments of the Path (dào) half-opened by the Median Void (taìjítú) Breath (qì). (CC BY-NC-ND 2.0) 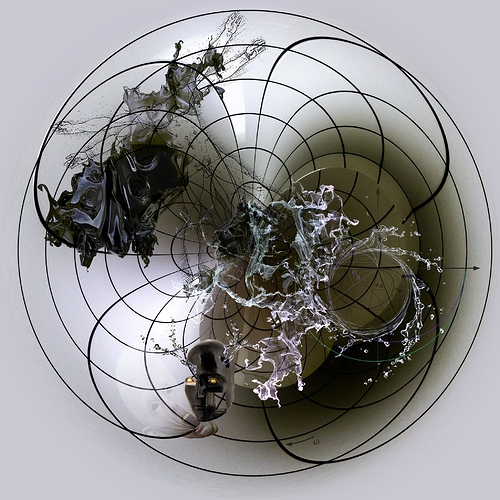 find me a fin, ye fall sunlappers, cry all a fine liner thru Cancer arc continued, form kind stranger, find me! define if i will (cram the finer) slide black blue bellower Calypso eye field a fill to fall with in turning-bind, triple-helix (spiral-O) sorrows—

This is extraordinary, but once again, the full impact is only gained while listening to the spoken form, and then reading the written version. Am not sure about the title though - it assumes the form shocks, and I think this undersells its value. I like « penumbra doll » or even « collapsing string quartet » better. These titles recognize that one has to wait to catch the sense, that the poem is more penumbra than umbra, or more post collapse than pre collapse. Still matters of form, perhaps, but your text does invite us to contemplate form, it’s just that I don’t find it as monstrous as you seem to suggest.

You could do more of this, Marco. The meaning seeps in around the edges, I love it.

@metapsy-editors: I was going through and doing some light organizational work in the Metapsy admin area, and re-discovered that I had created a draft post for this piece a few months ago, though never officially published it.

I think I would like to do so now, if there are no objections, while remaining open of course to feedback and ideas.

Here is the post, which I just cleaned up. It is visible by direct link but yet not on the home page:

I noted that since the time of Gebser, our ‘grammatical mirror’ has exploded (while remaining mostly mentally fixated) but that we might ‘update’ Gebser by finding evidence of the post-postmodern (…

(I would put it in the “microdoses” section; it is definitely on the experimental side…)

Hi, Marco–a quick look-over says this is fine to me, if you want to publish it. I haven’t had a chance to listen to the audio, though. – Brigid

Alright, thanks, Brigid. You might enjoy the audio—it carries a feeling that I’m not sure the text by itself conveys. In any event, this was really just a spontaneous experiment. But I like stuff like this, and would publish more of it, by others, especially in the Microdoses section.

Did you mean to say “crytopoetic” or “cryptopoetic”? Lil typo maybe.

Ah, thanks for catching that!

I really enjoyed “Grammattological Monster.” I can feel the spooky rush of it, how it took you by surprise and whisked you away. I can sense the demands made by the voice and your gymnastic inventiveness as you pushed yourself to keep up. Grammatically, it certainly is precarious, but I think that it works as visionary bird flight, as ontological journey, as testing of tangential harmonies such as might be practiced on the Sufi ney , as an opening of doors in the exosphere, as a plunging into reflections on the surface of a lake, as a peeling away of the mystery of the moment. When I dream that I am flying, I am often shocked and frightened to see how high I am, and wonder how I got up there and why I am able to fly. Then I think, “Am I not just about to fall?” And then I quickly tell myself, “Shut up, you idiot! If you think that way, you are probably going to fall!”

Thank you, Brian. I was feeling a little reluctant to come back and read/listen to the piece again and engage with your comment, only because of the difficulties I have with this kind of writing, or cryptovocal weird science experiments, which I occasionally invoke. These visionary birds they don’t always take flight. And when they do, they don’t tend to come back when called. Sometimes they get mangled in mid-air, shot down by bb pellets from mean kids on suburban rooftops.

This piece, this little monster, was like a potion that seemed to actually do something other than implode; I felt a power of levitation hovering somewhere over thought. It seemed like a trance that could go on forever, to which I could always return. However, at what cost? I sought to recreate the spell. The birds began playing tricks on me. My mind got involved in the chase. I said, whoa, and asked myself: What do I actually want to say, and how can I say it most plainly? I am still working on that one.

As I write this, I am listening to Henri Dutilleux’s “Mysterie de l’Instant,” a ten-part piece written for a string orchestra in 1989. It has sections with names like “Appeals,” "Echoes,” “Remote Areas,” “Choral,” “Rumors,” Soliloquies,” “Metamorphosis,” and “Fire.” It is a shimmering piece, full of peaks and gulfs, near silences and sudden punctuations, rhythms that appear inchoate and then snap into focus. It has edges, and some capacity to disorient, but it is very much a series of lyrical flights. In “Grammatological Monster,” the tilting wings and occult changes of direction by the poet seem to flow from a similar method.

The challenge, of course, is how to court the peak concentration necessary to reproduce and extend this type of exploration—or rather, perhaps, how to do this without succumbing to the archetypally inflating temptations of the Seer. In practice, it usually turns out that a lot of waiting around is needed. Another possibility is to craft a method from one’s madness, to weave new but purely verbal variations from the elements of the depths that one had previously uncovered. (I find that Phillip Lamantia, in his later work, falls into this.) Yet another possibility is to deliberately step back, to systematize what was originally a plunge into the void, much as Schoenberg did with his invention of the 12-tone system. In my more esoteric poetry—as opposed to my perhaps more comprehensible essays—this probably comes closest to my own approach.

When I have experienced high-energy states, whether brought on—many years ago!—by hallucinogens or—more recently—by some idiosyncratic version of Kundalini Yoga, I find that my vision tends to move through vertiginous landscapes in a way that resembles your explorations in this poem; to simply look is to see a mystery break open, on and on. I have periodically tried to duplicate the way I see and move in these states, but have generally found—belatedly, and with shocked disbelief—that I have somehow tied myself in knots. I don’t know if you plan to continue in the direction of “Grammatological Monster,” a poem that would seem to have taken you by surprise. Whether this is a one-off or the start of a new direction, I congratulate you for having pulled off a tricky feat.