Anytime that is ‘betwixt and between’ or transitional is the faeries’ favorite time. They inhabit transitional spaces: the bottom of the garden, existing in a space between manmade cultivation and wilderness. Look for them in the space between nurture and nature, they are to be found at all borders and boundaries, or on the edges of water where it is neither land nor lake, neither path nor pond. They come when we are half-asleep. They come at moments when we least expect them; when our rational mind balances with the fluid irrational.” – Brian Froud [1]

In the myriad alternative spirituality movements that are experiencing an influx of energy and interest these days, there has been a lot of discussion on reintegrating a respect for the numinous within nature. That we could go, at least in some way, home again to where we once came from—the oceans of grasslands, the woods, the creeks, the lakes. These are deep memories that each individual carries an echo of inside of themselves, that we are animals, that there is a wildness in us that cannot be rejected or forgotten, that these things are not evil or wrong, but when embraced give us the ability to harmonize the best of our abstract ideals and desires with the groundedness of embodied experience.

Whether one experiences Faerie as archetypal or actual energetic manifestations of Nature, they represent to us a bridge between the physical and the divine spheres, the world of humanity and the world of true creation, of origin. It is a grim irony the more we lose our connection to the primal, natural state–often described as “animalistic”–we actually lose more and more of our own humanity. To be grounded in the earth gives us the means to grow towards the sky. Yet part of our fall into civilization has meant losing those psychic roots that are in and of the trees. The folk beliefs our ancestors held about Faerie may be a reflection of the ways in which we are violating the sacred trust of our origin. These beliefs and stories, seemingly absurd, are mirrors to ourselves, where we came from. What Faerie rejects, perhaps, is what at least some part of our psyche, the wild part of us, longs to be free from as well. Understanding the folk beliefs of Faeries can give us insight into how humans understand our own liminal state between the animal and the angel, which, in essence, is what a Faerie is.

The British Isles lends us some interesting examples of what Faerie rejected and what it embraced. If a housewife wanted to attract a Faerie helper to her farm, she might put out a bowl of milk with honey. And yet should she want to keep Faeries away, she might hang an iron bar or horseshoe over the doorway. Faeries were understood to hate iron. Iron was not something understood as having arisen organically in Nature–created by humanity, it was considered something like an aberration to the world of Nature and Faeries would shrink from the sight of it. 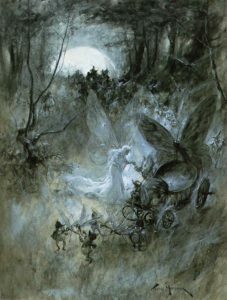 Some stories relate that a helper Faerie might become well beloved by a family of farmers, and, noticing that it wore no clothes, the woman of the household would sew a set of clothes for it. This would inevitably enrage the Faerie, who would leave the service of the home and may kill a few cows or sheep before they moved on. But why? The common understanding was that Faeries were prideful beings who were insulted by the idea that whatever they were wearing, or not wearing, wasn’t good enough for humans. But I think there’s more to it than that–like iron, clothing was a creation of humanity, something that did not occur in Nature. Faeries weren’t just rejecting these things out of pride, but as a reminder of our own origins as creatures of the woods.

Another supposedly effective deterrent for Faeries was, of course, religion. Crosses, holy water, and just the mere presence of a Priest was said to make Faeries flee. The belief in Faerie predated Christian Britain, but Faeries were slowly absorbed into its understanding as something akin to demons. The natural world in general was considered sinful and fallen, so the purest manifestations of this world would inevitably be considered such as well. And yet it could be argued that Faeries again were not evil beings fleeing from symbols of good but beings of nature fleeing from a distortion, an aberration. The patriarchal, top down hierarchy of that form of Christianity was the same as the iron, the clothes–something seen as grotesque and wrong by the denizens of Nature.

Indeed, it wasn’t as often that men got kidnapped and brought to the land of the Faerie. Faeries much more often would take children and young women and never bring them back. It was children and women who were the victims of civilization as it had been designed by men, where they had few rights and freedom of expression. In Faerie, these women and children could be eternally happy and blissful with these beings, who treated them well, like one of their own. In a way, it was Faerie that was their true home, and not the “world of men” that, in that age, seemed to hurt them far more than anything else. Children and young women were thought to be innocent and pure, their connection to the harsh realities of civilization more tenuous than men, and yet far more likely to suffer by its hand. In some ways, their kidnapping could be seen more as a rescue. Unlike the realities of the world of civilization, in folklore it was much more common for greedy men to be punished by Faerie than rewarded. A man seeking out the treasure of Faerie without any regard or respect could find himself trapped, tricked, or worse. There’s a sense of justice to these stories that was probably lacking in the day to day lives of the storytellers–often older women–who related them. A justice that repaid this patriarchal society for all of the harm it had done to the energies of the Feminine, both to the creative matrix of Nature and in the lives of ordinary women. Understanding this, we can see the continued folk belief in Faerie was the “keepsake box” of old beliefs of ecological and proto-feminist justice that was passed down for generations even under the crushing weight of the destruction of natural habitats and the dehumanization of women. Faerie kept the doorway open to a better world where those things were remembered, cherished, and defended, even if it was only in stories. Because of the commitment of the storytellers across cultures to keep these memories alive, they planted the seeds for those stories to grow into realities in the hearts of the children that heard them, even if it was a slow, steady growth like a tree. Now that we seek to create this world for our own children, it’s important that we don’t delegitimize Faerie as something flippant and trivial, just glitter and decorations for birthday party favors. We should seek out these stories and reexamine them critically, find their meaning and the truths that were hidden inside them, find a place for Faerie in our spiritual landscape once again, and treasure deeply and earnestly the eternally untameable within nature, within womanhood, and within each of us.