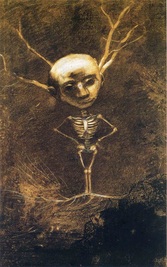 Why I Choose Panpsychism

Matthew David Segall has written an interesting post on the limitations of entrenched positions when it comes to determining what “stuff” the world is made of. Specifically, he is talking about...

@jeremy- Panpsychism could be one way of understanding “metapsychosis.”

The idea of telepathy assumes some jump which thought must take from one mind…to another mind, somehow passing over matter or direct material conduit.

However, if mind inheres in matter, then there is nothing to jump over. Mind itself is the medium. Matter is not other than mind.

So how do minds touch across time and space? I propose: by meaning to each other.

The means of communication—metapsychosis—is meaning itself.

When language and thought embody a multiplicity of minds, and these minds discover a resonant synchrony amid their divergent tendencies, an explosion of meaning occurs—like a primal music.

These minds may then enter into a form of conspiracy, a “breathing together.”

Which is ultimately, experimenting with panpsychism, a conspiracy of consciousness itself—

A conspiracy that conspires us, before we even know it.

But to what end? What’s the plot? I say, to its own intensification.

Thus, one of the core inquiries of Metapsychosis might be this: What does it mean to mean to each other more?

Marco, J.F.'s piece, alongside Matt’s and your own here, got me thinking. Consider it a poetic-thinking-through of the concept behind Metapsychosis so I could really get the feel of it. Posting it here for posterity as well!

Related word: metempsychosis: the supposed transmigration at death of the soul of a human being or animal into a new body of the same or different species.

From the Greek word, meta, meaning “with, across, after,”

Denoting, in English, most recently:

“a work referring to itself or to the convention of its genre; self-referential”

However, in combinatory form:

It denotes a “change of position or condition,” (i.e. metamorphosis, metathesis)

It denotes something of a higher, or second-order: metalanguage, metatheory, etc.

METAPSYCHOSIS denotes, to me, a movement of soul-within-soul. Mind to mind. Psyche to psyche. The movement and transmigration of consciousness, culture, and world(s) as they churn in the sea of becoming and meaning-making.

As a praxis, the writers of this journal are encouraged to relate to one another as an active process of connection. Culture is an act of meta, movement towards psyche, or soul, as psyche. Metapsychosis is the constellating act of the starry night.

It is a brilliant, shining act of emptying oneself out into the world and thereby poeticizing it; turning the world inside out.

Abounding in the infinite sky is the infinite act of conversation and relation; the world is the cosmic Host of Teilhard de Chardin; the world, the worlds, in poetic act of God-expression.

To view the world is to write it, enact it, relate it as a poet would relate to the sensorium of their terrors and delights. It is a literary act to see the world as word and the hidden language of all things as covertly gifted to all within the holy fire of imagination.

This is the dream of metapsychosis, then; to view the world aflame with the light of all suns. A linguistic turn of ontological poeticizing.

Metapsychosis is interested in the transmuting of culture and language to explore meaning-making; to be at play with the creative powers of the psyche and attempt to speak-with-soul-in-mind in a world whose light is flickering out –– at the precipice of planetary catastrophe and social disaster. We consider these things as dire and serious, and we cannot but relate to the problems of the world by invoking the poetic invocations of artistic inspiration and literary conspiracies to be an affective force in world-turning. We believe culture is consciousness, and consciousness is world, and so to participate as a media platform, we see ourselves as agents of enactive culture-making. Social poetics. This is a participatory, creative medium that needs the all-beckoning call of Finnegan’s Wake, “Here Comes Everybody”. We believe in the transformative power of art, literature, and creative scholarship to affect constructive – or deconstructive when necessary – forces in the world. We believe media has a responsibility to be ethical, open, and relational.

Our social poetics is, in the end, a Theory of Everybody, because it is a Theory for Everybody. Not a singular theory, mind you. “Theory” here denotes contemplation, a subjectivizing preponderance of the world in order to relate meaning to it. We aim to inspire poetic community, artistic expression and the erotic union of poetic-intellect to bring forth culture and community at the edge of civilization. To poeticize is to build; to partake in world-making (mythopoesis), and so a Theory of Everybody, standing on this precipice, is a radical, humble act of poeticizing ourselves – and all who come after us – into the future.