I just ordered The Minor Gesture. I’m looking forward to reading her again. Her collaborations with Massumi are especially interesting.

@brian.george51 has introduced me to Giogrio de Chirico, whose works, I believe, may qualify as ‘aperspectival’—he produced many paintings of Ariadne, which may resonate with themes emergent from ‘following a thread.’ 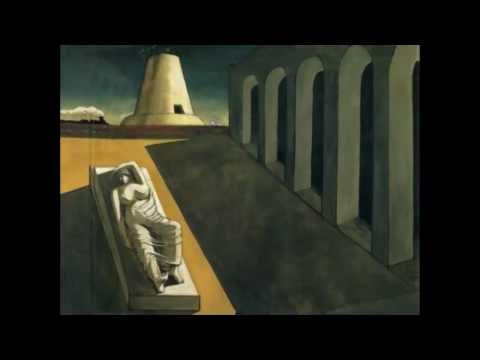 In the online art journal “The Finch,” I have two essays on de Chirico and two prose-poems written in his persona. As a child, I loved art and knew a reasonable amount about it. My favorites were Gauguin and Van Gogh. I appreciated their work and was fascinated by their lives, but my response to each was pretty much conventional. My discovery of de Chirico at the age of 15 was an entirely different matter. His work penetrated to some mysterious psychic depth and there were times that I felt almost haunted. He scared and delighted me, and he changed my whole way of looking at the world. Since then, I have over and over returned to his paintings and his writings to explore and question them from unexpected angles. This decades-long dialogue has resulted in the book “Maps of the Metaphysical Double: In the Footprints of de Chirico.”

An excerpt from my essay “The Artist as Blind Seer: A New Perspective on de Chirico”:

There is one question that we must always ask about de Chirico: Who or what is speaking or acting on any given occasion? For he is not one self-contained being.

In “The Lassitude of the Infinite,” as in many other paintings from the period of 1910-1920, long shadows project from two tiny figures at the far end of a vast piazza, at an angle to the reclining stone Ariadne in the foreground, gigantic in comparison. The two figures stand or walk, in silence or in conversation, as Ariadne, wronged by Theseus, broods in melancholy transport on her plinth. Trailing a long plume of smoke, the locomotive of Theseus steams toward Athens in the background, behind a low brick wall that separates the piazza from the ocean. In paintings from this period, there is almost always space between these two archetypal figures. They seldom touch, but instead display the formality of diplomats. So thinly has the artist painted them that they appear to be two spirits who have materialized from the aether, or two shades who have accidentally wandered from the Underworld. Space consumes them. They are only just barely present in this dimension of existence.

In the later works, however, and especially in the long “Piazza d’Italia” series, the two figures are usually pushed much further toward the foreground. Wearing suits, they have turned their faces toward the viewer, and are far less spectral and more three dimensional. Anxiety — both that of the artist and that of the Dioscuri — is now more or less under control. The mood of wrenching loss has evaporated. Props in the background have been mass-produced, as minute variation plays the part of the visionary seizure. The two figures have walked and stood on this piazza a great many times before, and yet they are not where they are, or where they believe themselves to be; how odd it is then that every detail looks the same. By the reproduction of the fixed form of a memory, the artist has attempted to partially literalize its content. In this way, he both invokes and regulates the power of the symbols that had once been broadcast from an alternate reality. All of these things are significant, but the crucial change is this: in almost all of these later compositions, the two figures are portrayed in the act of shaking hands. Perhaps they are off to the Caffe Greco for a few cups of espresso and some pastry. A gesture seals the new understanding between the human and the infinite. For the moment, a truce.

John, Lisa Maroski here, dealing in from Spain! I am with my dear friend Lynnclaire Dennis. I think her work might be of interest to this group. Check out the book The Mereon Matrix: Everything Connected Through (K)nothing or the website https://mereon.org. In my humble opinion, this is some of the most cutting-edge work I have come across. If you think it is a good fit for the group, perhaps she could give a talk/lead a conversation, as I did.

Great! Maybe we can arrange that soon? I think next week would be open which would be Tuesday the 17th. Maybe we can set that up? I am familiar with Lynnclaire’s book and would love to learn more. I will discuss tomorrow with the group, we are still working with the Jennifer Gidley paper. I’m looking forward to the next phase!

Hi John! Wow, I’m thrilled you know about my work. I’d love to talk, and soon is always better! Let’s talk about details! LDennis@Mereon.org is the best and easiest way to connect! Hey from Lisa who is sitting across the room!
Lynnclaire

Excellent! I will consult with the group tomorrow and get this to happen. I am a big fan. Much thanks.

John, what are you up to in NYC? LD

I live here in the East Village. NYC is a safe haven for eccentrics such as myself, who dont fit easily in any category for very long. I have a deep interest in philosophy of mind and creative writing. I found your book fascinating especially how you arrived at this new emerging field of study with the help of Kauffman and friends. We are really interested here in developing collaborative research for investing alternate ways of knowing. Your book certainly has much to offer in that area.

It all works for me, that’s for sure. I’d love to hear more since I got sidetracked from my original post-Meru-session plans.

John et al,
The administrators of the site have apologised and my responses are no longer blocked. Seems that meaningful ‘dialogue’ in real time is unusual in a cyber world of sporadic conversation. I know Lisa sent my response, so I’ll refrain from resending it!

Tried to respond to the video on Ariadne, but somehow ended up here. WIll try again!

Just want to add that there are many versions of the Ariadne myth. This version emphasizes “abandoned by the man she loves” and “princess”, which is definitely not what attracted me to the myth, and the my writings on it, use of the name, etc. In some versions, she is a goddess in her own right, reduced as so many goddesses were, to lesser beings such as nymphs and princesses, wives…and well, abandoned lovers.

This version emphasizes “abandoned by the man she loves” and “princess”, which is definitely not what attracted me to the myth, and the my writings on it, use of the name, etc. In some versions, she is a goddess in her own right, reduced as so many goddesses were, to lesser beings such as nymphs and princesses, wives…and well, abandoned lovers.

Understood, Ariadne. Although even in Monteverdi’s opera, the role is more ambiguous than a simple synopsis would suggest. Ariadne has more power than should someone who is simply grieving being rejected - that is partly what the image schemata-based analysis showed… But of course there are many variations on the story.

I need help figuring out why I cannot comment on the website anymore. I contacted Johnny, he said try Marcos.

Contacted Marcos a week ago. No reply. Not sure where else to go. Thanks for any pointer, Ariadne

But you were able to post in this thread … I was notified by email late last night that a new posting (namely yours) had appeared here, so you can apparently post here without any problems. Have you been unsuccessful in other threads?

Marco has access to all the logs, etc., so he’s the one you need to reach. Have you sent him a direct mail via the system?

If you’re unsure how to do that, here are the some instructions that might help:

I spent the weekend fasting as part of my diet, and while on the fast I found I couldn’t write or work. So I picked up Gebser’s The Ever-Present Origin and ploughed in, as well as reviewing the first few video chats from the Gebser group. The thing nobody seems to have said (except, I guess, Ed @achronon), is what a brilliant writer he was. The work is extraordinary. His analyses are brilliant, and, as Ed emphases, he is exceptionally clear in laying out his arguments, even when these open up new ways of thinking that fall outside one’s intellectual experience. I haven’t even finished the first 70 pages and already I am completely hooked. I figured I should read Gebser before applying to the Gebser Conference, and I have no regrets. I won’t finish the whole volume in time for the deadline for submissions, but at least I will be “in the know” and have some time to assimilate Gebser and work out what I might have to contribute…