A number of people have asked me over the past several months to explain more about my use of a twenty year life plan since I first mentioned the subject. I have no written document I can refer you to, just my own life experience in formulating and following such a plan. I propose to explain how this started, salient features of the process as it has unveiled itself to me, and diverse thoughts and comments about the practice, and then open the group up to discussion.

My name is Geoffrey Edwards (@Geoffrey_Edwards) , and I have organizing my life as a function of 20 year life plans for the past 30 years.

Added a seed question above: How does a twenty year life plan “mesh” with other long term projects/philosophies, such as The Long Now?

Such long term, deep thinking has been explored personally (how can I best arrange my life to fit in with the long term “survival” of myself, my loved ones and the planet as a whole?) and collectively (see also The Long Now Seminars and/or Svalbard Global Seed Vault for a couple examples). @Geoffreyjen_Edwards, when he first mentioned his time-spanning projects, allowed for my mind to grasp a deeper sense of time and human meaning…but don’t want to make this sound so mysterious or serious! It is a practical perspective to place on most any project, as we humans tend to do anyway as we look into the future.

I would like to hear more about this “20-Year Planning”. I was just shopping for Life Insurance today, (for both myself and my loved ones). In my initial search, I was surprised to find that 95% of life insurance carriers DO NOT cover (such poor, unfortunate souls as myself) people with mental health disorders such as depression or anxiety and esp. not bi-polar disorder. With my depression diagnosis (which I acquired as a teenager. Thanks to my mom who couldn’t differentiate between puberty and mental health disorder, at the time).

Be Careful, you parents of prepubescent children out there! Don’t make the same mistake. Puberty is indeed, madness. But not the kind that warrants inpatient hospitalization at the tender age of 15 (for Pete’s Sake, MOM, Geesh!). So, it has been a challenge trying to plan for the future.

Luckily, I’ve found a few companies that insure crazies like me. Also, I am looking to transition my retirement savings plan into a long-term care policy. So, by the time that I get old (say, like 70+), I can afford to spend my final years in a nice, cushy, gated assisted living community.

I will make every effort to attend this event tomorrow. No financial planning or advisement necessary. Thanks, Mr. G.!

Where are your “perfect words”? You didn’t participate too much in the topic you started (Great Topic, BTW!). I was looking forward to some examples from you, as well!

Ha! stay tuned. Apparently, the topic has been tabled until Tuesday, September 4.

I am so happy to have made it to Geoffrey’s “20-Year Plan” Zoom event this afternoon! I learned so much from Geoffrey, Marco and Mr. Jabbor. When I learned more about Geoffrey’s vision for his current research and how it applies to his 20-year plan, I developed a new enthusiasm for the posterity of the arts and sciences. Thank you, guys, for caring so much and putting your concerns into discernible ACTION! I just LOVE You All So Much for being both Thinkers AND Doers! Because that is the way things get done and change erupts.

The article on religion was in The Guardian as I indicated : Religion: why faith is becoming more and more popular

Faith is on the rise and 84% of the global population identifies with a religious group. What does it mean for the future?

My numbers were off a bit… for scientists, those who admit some form of spirituality is 45% not 65% as I indicated, but those who indicate they are atheist are 25%, so there is still a big margin of « undecideds » (30%). Still as I indicated, twice as many profess some religious affiliation as none…

Yes, it was a lively cafe, fun and informative. Thanks for stopping in @KPr2204 and contributing.

We neglected to mention, during this talk, one of the organizations that is doing a lot to advance the conversation between science and spirituality. They don’t use the word “spirituality,” however, but “nonduality” (which is typically associated Eastern, Buddhist and Vedanta, notions of enlightenment), but that’s semantics.

Here might be one good follow-up to our talk, from the recent Science and Nonduality conference, which argues a concept which I think has been prevalent in previous talks, i.e., that consciousness is fundamental to reality and even at the base of physics: 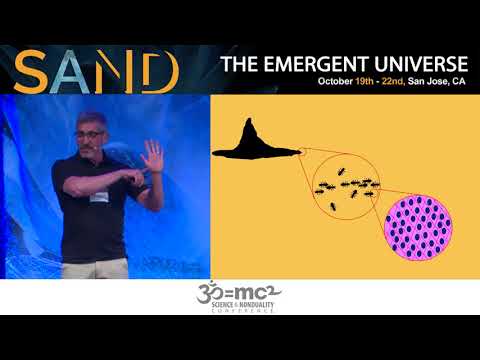 I find the idea that objects are scale-dependent for the perceiver, and that we can have complementary views on a phenomenon that disclose very different aspects of its reality, really interesting.

Here’s a previous talk we did on a similar theme: Cosmos Café: Integrating Science, Art, and Time [6/5/18]

(@KPr2204; the first video above might also provide a free viewing alternative to the “Expanding Reality” film you linked to elsewhere. Based on the trailer I saw for that one, the core idea is essentially the same. Wdyt?)

Yes, what you just posted above is totally consistent with this “Expanding Reality” movement (should we call it that, yet?). I would like to dive into this more and connect the dots…follow the yellow brick road, so to speak, and see where this leads.

Okay. I heard that most of you could not access the documentary, “Expanding Reality” via Amazon Prime. I talked to JohnnyD54 and we are currently working on a way to gain access to the doc and share it with some of you that may be interested (I KNOW that Geoffrey will be blown away!).

In the meantime, I have an attachment link below:

I actually purchased the trilogy and now I need to figure out how to get it onto here. Doug? Help?

I read the Guardian article. It seems like there is a subtle energy out there trying to make its way into 3-D reality with the culmination of spirituality and science making its way into the same orbit in our culture.

This reminds me of my conversation with JohnnyD54 regarding the current state of evolution. The commodity of the future is information. And (as I mentioned in our conversation) there are two types of info. evolving simultaneously, digital (or artificial intelligence) and analog (result of molecular biology).

According to the previous evolutionary model, one would adapt and conquer the other. Yet, as evolution is reshaping itself according to our collective awareness, the 2 forms of info are co-existing, interdependently and growing side by side.

If this continues, then we will evolve more rapidly and conserve humankind’s energy for creative endeavors rather than cleaning up the debris of “divide and conquer”.