Marco, it took me one full year to write/compose ThetaMark,. I then turned it over to Javi, and it took him six months to perform what we beta tested as ‘Reasonance’.

Marco, I’d love to know when you plan to activate your ‘Theory of Everybody’ website. It resonates with the non-theoretical tag for Belonging; Everyone matters. Everyone counts. The truth reflected in this sadly doesn’t mean it is true for our experiences or that it has be a ‘goal’. While We can make this universal knowledge known, what was long incomprehensible presently comprehensible, it doesn’t mean anyone among us has to be saviour or scapegoat. There is too much hubris in the world as it is. Transformation is free to those who are willing and have ears ready to hear. LD

Thank you ever so much for sharing this, Lynnclaire. Great balls of fire are indeed bright, but Simone is brilliant.

Thank you Ed. And that story is just the tip of the proverbial iceberg! The tragedy is that when I moved to Europe in 1999, I lost track of her, and for the life of my have been unable to remember her family name. I know her father worked for Proctor and Gamble, and she and her mom lived in a small town just north of Monterrey… One day…

John, I am in the middle of digging out some images for you that relate the spiral, the ear and brain! I’ll be back!

Marco, I’d love to know when you plan to activate your ‘Theory of Everybody’ website. It resonates with the non-theoretical tag for Belonging; Everyone matters. Everyone counts.

I will let you know for sure, @LDennis33. I hope soon! Thank you again for so generously sharing your time with us. “Reasonance” is the track I have meditated with, and it’s one of my favorites.

Link? Pointer? The internet is a big place, or am I simply being me-blinkered?

It’s been an interesting day in Marbella… I was sitting at my desk when I suddenly heard a sound, got nauseated, and the thought ‘earthquake’ ran through my head seconds before it actually happened. This use to be my favourite party trick when I lived on the edge of a volcano, when it happened I’d tell people to hang on, we were going to go for a ride. I lost track of how many times Pele bounced me out of bed —literally— at least once a week. Joy to all. Lynnclaire

Link? Pointer? The internet is a big place, or am I simply being me-blinkered?

Ed, I had access to the tracks through working with iAwake Technologies (on their website)—which I talked about here: Stealing Flow: Using Audio Brainwave Technology for Writing and Art, with Douglas Prater.

Javi used to work with iAwake, but looks now to be working on his own projects: http://www.theel.io/ (beautiful website, btw, which I’m just now seeing for the the first time.)

I understand that ‘Reasonance’ was a collaboration with Lynneclaire, so she may know its fate!

As long as I haven’t been sucked into the internet void, I’m content.

When I searched for “Reasonance”, I got a hit – at iAwake, oddly enough, that showed the keyword, but when I clicked on the link and was taken there, no Reasonance was to be found. It was one of those cases of OK-so-what’d-I-miss?

Everything makes sense now. Thanks for the clarification, and the internal pointers as well. (I’m on the site a lot, I’ll admit, but I don’t read/listen to/watch everything.)

Thanks for this, Lynnclaire. Pretty isn’t necessary, the content speaks clearly enough. I’m starting to get a much better feel for how this all fits together.

Having said that, it would be helpful, though, when plopping something in from a published work to at least add a reference (I’m not sure if the heading on the page is from the book or the particular chapter; the book title would probably be enough), as it expedites any follow-up that the reader might be interested in pursuing. Thanks.

First: Apologies for lack of references; all are screenshots from our yet to be released book… not for public distribution. https://www.worldscientific.com/worldscibooks/10.1142/10805

Re: REASONANCE: It took me a year to do the math and Javi 6 months to produce. It was in a 2 year beta test with IWAKE that ended April 1. We are now initiating medical testing and it will be rereleased under the name THETAMARK when those tests results are in. There is a bit about it on mereon.org. Stay tuned

Questions are all welcome! It’s fun to respond…

Here is what is keeping me very busy! 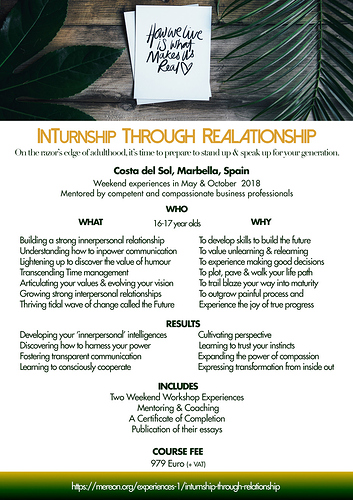 Though not necessarily visionary, the attached article is worth a read because of the knotty issues it addresses and which we CCaférs spent some time trying to unravel, both with Mereon and Meru.

With a writing system dependent on touch, says Hyland, “you must have a different way of being in the world”.

A different way of being in the world…interesting…feels like they were drawing upon a different somatic blend…finger eye coordinations…gestures that unfold alternate ways of processing information, from different arrangements of the senses…different ways of knowing…must have had some synesthetic effects upon the ‘reader’ perhaps beyond the three dimensions noted by the researcher. If these readers were more than just accountants but had access to mythic and magical structures, we might expect that they were working out some complex social topologies…inter-intra-extra dimensions!

What really decimated the Indian population was not the military might of the Conquistadors but the microbes they carried with them, overwhelming immune systems. This was a clash of biology, as much as culture, a clash between different kinds of embodiment. The epidemic probably wiped out the occult arts these people had developed, which was probably as sophisticated as their architecture.

With a writing system dependent on touch, says Hyland, “you must have a different way of being in the world”.

Very true … I guess braille is included here. But what struck me was the phrase “3D writing system” in the article. Cf. McLuhan on linear (i.e., 2D writing) systems.

If these readers were more than just accountants but had access to mythic and magical structures, we might expect that they were working out some complex social topologies…inter-intra-extra dimensions!

Indeed. There also seemed to be at least a small group of researchers who are still looking for narratives, not just accounts. Perhaps there is still hope.

What really decimated the Indian population was not the military might of the Conquistadors but the microbes they carried with them, overwhelming immune systems.

While I agree, given the actions of the Conquistadors (and all their follow-ups), if the microbes hadn’t been there to make it easy for them, I can’t help but think they’d have proceeded manually.

I have to review McLuhan as I studied him in a random way many years ago. Also studied Walter Ong on similar themes. Mc Luhan reading group might be fun. Years ago I read Archetype and Cliche , and The Meduim is the Message. He’s deep but also a pleasure to read. If you care to elaborate on McLuhan please do. He was full of surprises. I have yet to read The Guttenberg Gallaxy.

I have yet to read The Guttenberg Gallaxy.

Wha??? I managed to read a book you haven’t yet ? Will wonders never cease

That is the book that takes linearity severely to task. That of course, would be the most yielding, I think, for a group read, as most people have had a lot of The Medium is the Message, both directly and indirectly.

Maybe we could do a chapter from that book? Something short for a Cafe. We could do a comparison with others we know of. I just got a new book The Marvelous Clouds, recommended by Douglas. The author reviews Heidegger and McLuhan, an odd couple, for sure. At any rate it might be fun to update with some of our own research here. As our conversations have started to complexify, I imagine we could take a look at media studies and our on line experiments. Seems that the Octavia Butler reading group has attracted a research study. Miranda, who is doing this study, will present some of her work soon. I think we need to do a study on ourown study/recreation practices. Are we detecting any patterns or meta-patterns? Have we learned anything? Can print culture find a new public?

I just got a new book The Marvelous Clouds ,

This one made the cut (birthday’s are useful excuses for frugal Dougs to go all out)…a small piece from the ever-pulsating lifeform that is the recommended book list. @Michael_Stumpf is the fine fella that turned us onto the author John Durham Peters. Here is the intro to the introduction as a taste:

The time is ripe for a philosophy of media. And a philosophy of media needs a philosophy of nature. Media are not only devices of information; they are also agencies of order. They not only send messages about human doings and our relations with our ecological and economic systems; they are also, in the expanded sense of the media concept that I will argue for, constitutive parts of those systems. Humans and their crafts have entered into nature and have altered every system on earth and sea, and many in the sky, to the point that “nature,” understood as something untouched by humans, only exists on earth where humans have chosen to set it apart as “natural.” The human steering of nature, of course, does not guarantee smooth sailing, and stormy weather is blowing on the ship from several directions. In light of both the possible irreversible threat to our habitat by climate change and the explosion of digital devices, of both carbon overload in the atmosphere and superabundant data in the “cloud,” it is good to open again the relationship of media to nature. This book offers a philosophy of elemental media— the elements that lie at the taken- for- granted base of our habits and habitat— with special reference to the digital era.

I am new to this line of thought (though, like @achronon states, some of us newcomers probably have an indirect infusion of McLuhan, Bateson and kin) so wouldn’t mind exploring in this direction. @johnnydavis54 stated in the latest Butler session the possibility of exploring Haraway then Bateson. Walter Ong and McLuhan have been distant stars that i wouldn’t mind visiting…though I might have my head in the Clouds for now…