How Do We Decide? The Ontology of Self-Governance [CCafe 7/24] 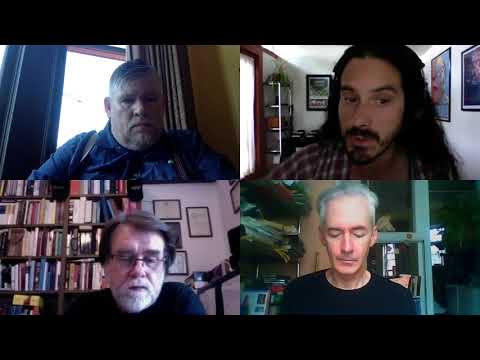 How does a group—any group—make collective decisions and act with coherent intentionality? What notions of ‘self’ and ‘other’ shape different kinds of groups—what axioms regarding the nature of reality?—and how do these fundamental conceptions (of self, other, being, energy, consciousness, mind, time, power, will, the ‘good’, etc.) inform how the group relates to its environment, and how its members interact with one another?

What are our relative experiences of ‘making group decisions’ on different scales (from local to global)? And going meta (or microcosmic), how do WE (as Café participants) make even simple decisions, such as, ‘What is our topic for the week?’ What are we assuming when we do so? How do our relatively informal acts of self-governance open and close possibilities?

I am proposing this topic as preparatory for later, more concrete discussions on how Cosmos itself, as a cooperative, will govern itself—or how WE, as (sovereign?) constituent-owners, will use tools of governance to express ourselves. However, I would prefer to save specific operational discussion for a different occasion, and use this Café for a more open-ended collaborative inquiry that should happen before (IMO) making any real decisions, anyway.

Note: I have a proposed a separate topic for the particular protocol of decentralized, distributed, digital governance called CoGov (here)—and there are other such systems we have discussed, such as Democracy.Earth and MiVote—but the intention in this talk is to focus on the philosophical layer of the equation, not a particular technology, process, or implementation. Most essentially (but not essentialist-ly), I propose this talk as an inquiry into the we.

Is this reading / discussion thread still open? I am very interested in learning more about this topic and continuing the conversation. Is “…Self-Governance” still in progress? If so, I would like an invite.

This thread is open to all and we welcome any thoughts! We went in all directions during the conversation so wondering what in particular interests you?

We did have a conversation with Raymond Powell, a Holochain community builder and principal author and developer of CoGov.tech recently and the discussion can be found here:

[Cosmos Café: Digital Governance for Planetary Collectives: CoGov.tech and Cosmos] [download] The Café crew welcomes Raymond Powell, a Holochain community builder and principal author and developer of CoGov.tech, to talk about how distributed systems of digital governance could change the way we operate in the world. We explore how Cosmos.coop could potentially use this new tech, as well as wider possibilities. What would collaboration look like in a living system des…

Thank you very much. Douggins!

The issue of Self-Governance has come up in a couple other threads relating to spiritual principles and science. Can anyone think of such universal principles of the spirit that would foster self-governance? The “Golden Rule” and Immanuel Kant’s “Categorical Imperative” are no longer sufficient to maintain internalized order within the human soul. So, what’s next?

I believe that everything must have begun with St. Augustine after Descartes, Pascal and Hume (attacking metaphysics) and then Kant (who continues with metaphysics) until Heidegger, perhaps the last one who has worked with her. Kant gives continuity to metaphysics, he does not remain only in the critical project of the “limits of reason”. A critique of the reason that is yes of the metaphysical field (sensitive mechanisms-intuition that deal with empirical) and with the apparatus a priori of the subject and that makes possible the knowledge (reason). Practical reason, for example, is something that escapes the metaphysical plane, and can even evaluate itself with a central metaphysical element: freedom. When we come across Kant putting the reason in the court, and seeing that the judge will be the reason itself, we are in doubt if the epistemology separates from the ethics. We have the impression of being a good pragmatist that the watertight distinctions between Truth and Good do not hold. Today one of the biggest challenges for me is to understand the language and its in us humans. I read a recent book by Giorgio Agamben (What is Philosophy?) That he treats well about it, but I still can not understand how it was ever possible for someone to say “I want”, “I can”, “I go” or "I love ". He says our voice does not exist anymore. "There is not a voice of ours that we can follow the trail of language that we can pick up - in order to remember it - at the point that dissipates in the names, where it is written in the letters. We speak with the voice that we do not have, which has never been written. If we speak, then language is our voice; and as you speak now, this is ethics. “That is, in a way, our” animal voice "(speech like the sound of a meowing cat and a barking dog) is diluted in language. Agamben’s thesis is that the acquisition of the self comes with language, for the self is an exclusively linguistic element, before it is anything psychic - it can only come with the end of speech and the functioning of speech. To speak is to speak the language and, for this very reason, to have no way of expressing any subjective experience pertaining to organic life, to the animal voice, or rather to that voice that is no longer animal voice and still is nothing human. "Modern man has no voice, just speech. Language as a cultural construct that it reinserts in speech, in the place of the voice, is something that has a certain externality, which makes it to be someone, to stop a self, a subjectivity, at the same time that it loses it. Language is always a great silence of man. “Acquiring the voice as a” spoken voice "is, in fact, losing his voice.Unlike animals that have a voice, we humans have language, so animals have language only in one sense (a semantic and semiotic language), which means that there is a certain relationship with language, since in fact there is a sign in that voice, I "is exclusively linguistic, but I go further, how would I listen to myself without the established language itself?
When we sleep even in silence we listen to our “inner voice”, but just before thinking I have to listen to the thought. Antres of the logical cogito there is a sonorous cogito. If the “I” is, say, “hollow” and lacks substance as we would get to self-consciousness? Would not it be easier to think that something “hollow” could turn around and close in on itself with some kind of force, energy, movement, or vibration? Something in this “I” must be happening, some kind of experience, sensation, movement, flow, change, turning, restlessness.He could not keep and bring his self- I "would have to come out of itself if it were to be substantialized or to be initially subservient to then gain substance, but not something completely empty initially, but something that is in a transition in itself, say, a self that is wanting, in the course of wanting The self could not be a type of compass looking for the North As long as this cardinal point was not fixed it would revolve around itself in different directions as if he wanted to locate himself or even looking for himself until finally by some great turn the pointer if it fixes in the North with a direction of the Self that is now a fixed point (subjectivity: self-consciousness, disinhibition and identity) . Consciousness of thoughts and responsibility for acts, as well as the search for reasons in itself for action or omission and identity related to social “I”, the pronoun that is adjective as qualities (beautiful, made, military). A magnetic pole driving itself and its position and thought itself as thinking being and thought thought?
Another interesting book is: Francis Wolff: “What does” think? Adventures of thought between Antiquity and Modernity ".

I haven’t read this yet, Eduardo. But I sure am looking forward to it! Thank you for replying to my query. I will carefully read and respond to your above comments, promptly.